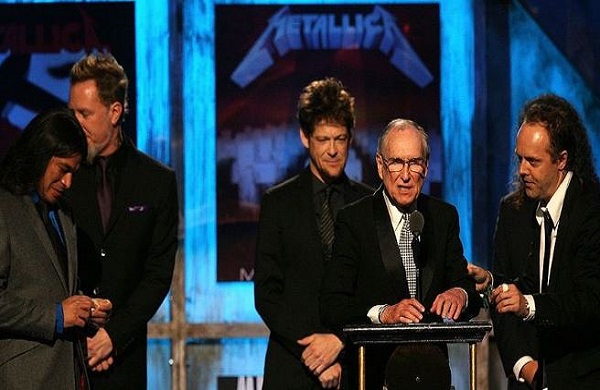 The late Metallica bassist Cliff Burton’s father has passed away at the age of 94. Ray’s daughter Connie and sister of cliff, shared a statement on Facebook saying:

“To let you all know that my Dad died last Wednesday. Rest in peace.”

According to the NME, Ray was a big factor in overseeing Cliff’s legacy when the bassist died at just 24 years of age. Th the band’s tour bus crashed in Sweden in 1986.

After Cliff’s passing, Ray remained an enthusiastic follower of Metallica and was often at the band’s concerts. He was also at Metallica’s induction into the Rock Hall of Fame.

Speaking on a Metallica podcast recently, he shared that he still gave money from his son’s band royalties to fund music scholarships.

“From the royalties that I get, I give a scholarship to the high school he went to, the Castro Valley High School, for music. I think Cliff probably would have done that with his money, because he was not against education by any means. He liked it very much.”

In a 2019 interview,  Ray spoke to Gibson’s Mark Agnesi, where he noted Cliff’s drive to become a successful gigging musician. “Cliff knew what he wanted to do and went out and did it,” Ray said.

“How could you not support a child who has that initiative already in their system and wanting to learn an occupation like that? The way he pursued music and the enthusiasm he showed toward the playing, we thought, ‘well, let’s see what happens.’ Then when he came and said, ‘Can you support me for five years?’ not long after that, it was absolute history.”