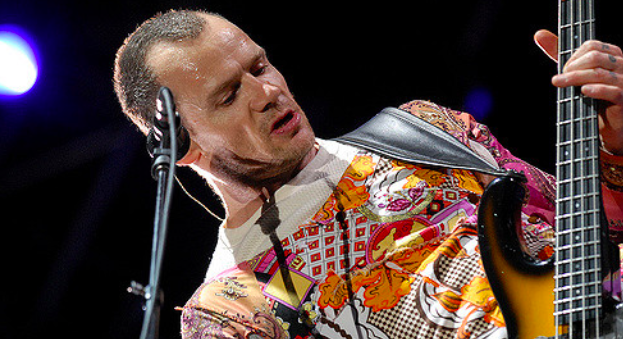 Red Hot Chilli Peppers’ crazily energetic ‘Flea’ has opened up about his battle with addictions, including a past addiction to prescription drugs. As part of Time Magazine’s Opioid Diaries, Flea wrote a lengthy piece about the real gravity of the prescription drugs crisis in the US.

Flea, real name Michael Peter Balzary is now 55 years old. In the piece, he describes how he used drugs to battle his anxiety.

‘I’ve been around substance abuse since the day I was born.’ said Flea. ‘All the adults in my life regularly numbed themselves to ease their troubles, and alcohol or drugs were everywhere, always. I started smoking weed when I was eleven, and then proceeded to snort, shoot, pop, smoke, drop and dragon chase my way through my teens and twenties.’
Advertisement

It wasn’t until the age of 30, in 1993 that Flea decided to completely kick his drug habit, having seen three of his friends die from drugs abuse. But sobriety hasn’t been without it’s difficulties, especially when he was prescribed drugs to treat pain following a broken arm.

‘A few years ago I broke my arm snowboarding and had to have major surgery,’ he said. ‘My doctor put me back together perfectly, and thanks to him I can still play bass with all my heart. But he also gave me two-month supply of Oxycontin. The bottle said to take four each day. I was high as hell when I took those things. It not only quelled my physical pain, but all my emotions as well. I only took one a day, but I was not present for my kids, my creative spirit went into decline and I became depressed. I stopped taking them after a month, but I could have easily gotten another refill.’

‘Perfectly sane people become addicted to these medications and end up dead. Lawyers, plumbers, philosophers, celebrities — addiction doesn’t care who you are.’

He continued: ‘Addiction is a cruel disease, and the medical community, together with the government, should offer help to all of those who need it.’

‘Life hurts. The world is scary and it’s easier to take drugs than work through pain, anxiety, injustice and disappointment. But by starting with gratitude for the rough times, and valuing the lessons of our difficulties, we’ve got the opportunity to rise above them and be healthier and happier individuals who live above the strong temptation of addiction.’

For help and advice on overcoming addiction, visit here.

Dave Grohl Reveals Which Band He Would Most Like To Drum...