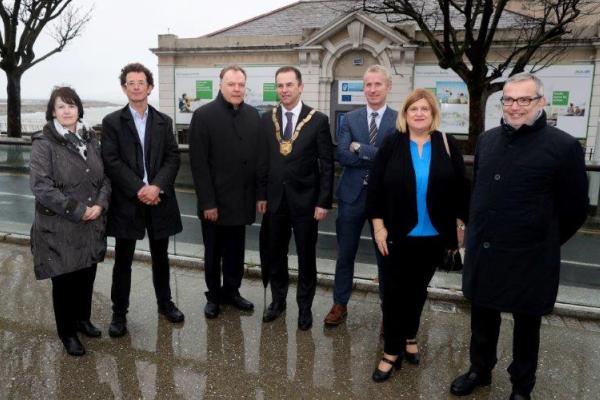 Development of the new Dún Laoghaire Baths will kick off in the coming weeks. This project will transform the seafront and reinvent the area as a destination for swimmers and for water sports enthusiasts.

The new Dún Laoghaire Baths, which has been designed by dlr Architects’ Department, will see a new public café linked to an outdoor terrace with views over the Bay, along with studio workspaces for artists and new life guard facilities.

New public toilet facilities at street level will be fully accessible for the mobility impaired and a new jetty and changing areas will provide access to the water’s edge for swimmers and landing points for canoes, kayaks and other water sports equipment.

The development will take approximately twenty-two months to complete and will open to the public in the spring of 2020. The new Dún Laoghaire will provide not only a connection between Newtownsmith and the People’s Park, but will also link the town of Dún Laoghaire with its seafront.

Speaking at the contract signing, An Cathaoirleach of dlr, Cllr Tom Murphy, said, “This is a very exciting time for the county of Dún Laoghaire-Rathdown. The Dún Laoghaire Baths is a renowned landmark in Dún Laoghaire town and the development of the Baths site represents a significant long-term investment in this public facility for residents and visitors to our county.”

dlr is investing heavily in the development of the Dún Laoghaire Baths as part of a whole scheme of works for the county under the three year Capital Programme, which will see an investment of over €742m invested in dlr county from 2018-2020. The project will cost circa €10m and has been part funded by the European Regional Development Fund.

Ireland Has The Lowest Interest Rates On Savings In The Eurozone