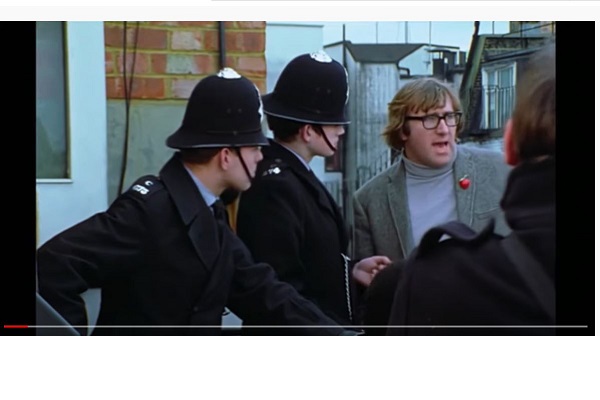 Retired policeman Ray Shayler who was tasked with pulling the plug on the Beatles’ Rooftop concert from 1969 has shared his story for the first time since the release of The Beatles: Get Back.

Shayler was 25 years old at the time. He was a constable as PC637 of “C” at London’s West Central police station. The station was also located just 150 yards Apple Corps, known as the headquarters of The Beatles.

Sitting at his desk, filling in a report at the time, Ray Shayler revealed that he could hear loud music from the building’s roof. He then received a call to attend.

‘And I thought to myself, that’s loud”, Ray told the Daily Mail.  ‘He looked a bit worried about it and, to be fair, a young lad on his own with not much experience would have had rings run around him by those sorts of people”.

This call turned out to be the iconic Beatles rooftop gig from 1969. This gig featured the fab four of Paul, John, Ringo and George.

Ray Shayler was one of the coppers tasked with shutting it down. No pressure!!!

This also features in the Peter Jackson inspired The Beatles: Get Back, featuring on Disney+.

Having had several ideas for a Beatles concert being shelved including performing on a cruise ship in Libiya which was turned down by Ringo and George, Michael Lyndsey Hogg had the idea of the band performing on the rooftop of Savile Row.

The only problem was that this gig caused traffic in the area to come to a standstill.

PC Shayler and another officer were called to the gig after several complaints were made from nearby business.

Ray revealed that the crowds intially blocked their access to the gig, but added, ‘Once I’d explained we’d had a lot of complaints from the other businesses on the street, they let us in”.

‘We had a few Beatles records and LPs at home; I liked their music. But when I got on the roof, I had a job to do and I thought, “Well, we’ve got to try and stop this”, he added.

“breach of the peace”

The Beatles “sort of looked at us”, continued Ray.

He then revealed that he spoke to the band’s manager Mal Evans. “I told Mal that, much as I appreciated what they were doing, it couldn’t happen any more as it was amounting to a breach of the peace”.

Shayler also stated, “I asked how long it was going on for. He said, “One more record”, so I said, “You might as well be hung for a sheep as for a lamb. Get on with that one and then it stops.” It was a discussion; it never got heated”.

Ray also revealed that when the band were leaving the concert, George Harrison and John Lennon did not talk to the police. The pair had recently been released on bail for charges of cannabis possession.

Ringo joked,“Don’t put the handcuffs on me!”, while Paul apologised for the “disturbance”.

Ray Shaler added, ‘If The Beatles had got stroppy or were determined to carry on, then things might have been different. But that wasn’t the way we worked in those days, and I always tried to resolve issues without arresting people”.

Months after this gig, the Beatles’ “Get Back” reached number one.

It was also reported that 26 cameras were set up at the venue as they knew the police would come after the music started.  ‘Certain cameramen were detailed to film us. I suppose we were unpaid extras”, he joked.