Love Foreigner? Like the idea of Mick and Lou working together again? Good news here then! 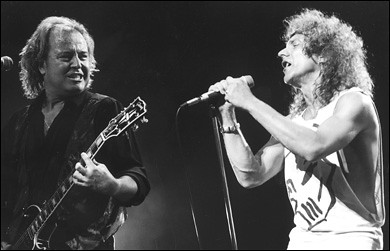 Mick and Lou will perform on stage together for the first time in over a decade at the Songwriters Hall of Fame awards ceremony in New York City on June 13.

In an exclusive interview, the guitarist, who has been leading a highly regarded new lineup of Foreigner since 2005, reveals that the pair will perform two songs — ‘Juke Box Hero’ and ‘I Want to Know What Love Is’ — together at the event. Apparently there wasn’t much debate in terms of song choices: “Lou suggested both of them.”

Jones goes on to explain that he’s “very much looking forward” to the event. “I’m so proud of what Lou and I achieved in those early years and throughout the time that we were together. I think it’s the first time that we’ve been recognized for our work and our writing, which was really the foundation of what we did together, as much as the performing.”

He’s particularly happy for the chance to celebrate with Gramm, who left the group because he and Jones “weren’t really communicating” back in 2003. “I think this band has always been a song-driven band and so that has its place for me and it’s very important and it’s going to be great to share that with Lou. It will help us to move along in our relationship, which has been fairly quiet in the last seven or eight years.”

Crowdfunder Launched To Build A Bowie Tribute In Brixton