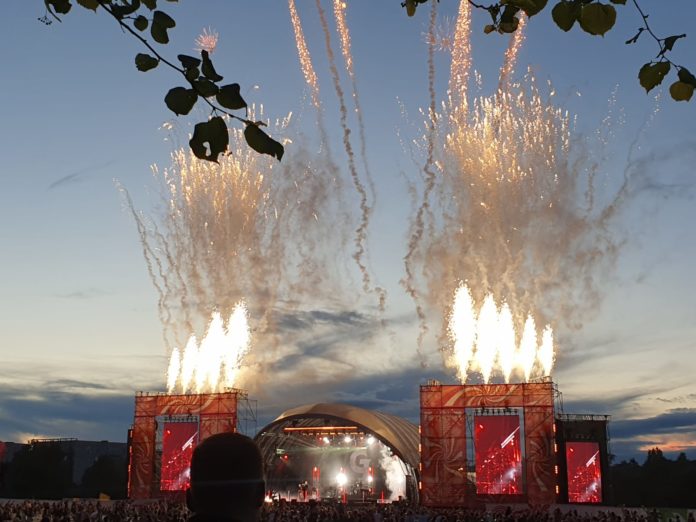 For some people, the magic of a live show is a distant memory – the lively chatter, the careless and at times embarrassing dancing and the glorious sound of a crowd singing back lyrics of the songs. This frenetic energy is impossible to recreate without a live audience.

Yesterday July 3rd, more than 3,500 smiling faces and excited fans chattered and strolled their way into the grounds of the Royal Hospital Kilmainham for the first festival in 15 months. The pilot festival was the fourth in a series of pilot events supported by the Department of Tourism, Arts and Culture to bring live music back to Irish audiences, and was hosted by the Irish Museum of Modern Art. It was a sight to behold seeing all the barricaded off pods allowing groups of four and six people to gather together within these pods to enjoy the festival. The calm and orderly manner in which the crowd dripped into the venue made a refreshing change from the mass swarm we usually see at a festival when doors open. Featuring Irish artists Gavin James, Denise Chaila, Wild Youth, Sharon Shannon, Lyra, and Wyvern Lingo, this event was set up to be like no other, and with such fantastic talent on show, it didn’t disappoint.

The event promptly kick-started into motion with a captivating set from Wyvern Lingo. The Wicklow band have been smashing it with live streams and the release of their enchanting second album ‘Awake You Lie’ this year so it was no surprise to see them soothing the crowd in no time with their groove-infused soulful tunes, immaculate harmonies and catchy melodies. They had a few tricks up their sleeve to make this set extra special, a mesmerising cover of No Doubt’s ‘Just A Girl’ was added to their setlist, as well as a special guest appearance from Denise Chaila on their powerful single ‘Ask Me’. A magnificent start to the festival.

There was something for every music lover at this festival. An energetic set from Sharon Shannon had the crowd attempting some pretty impressive jigs within their pods while mixing Irish dancing with some slight moshing for her metal trad tune ‘The Beast From The East. Wild Youth represented the indie-pop, dance floor sound on the night. The Dublin band belted out their infectious sing-along tunes and took full advantage of the opportunity to hear the crowd bellow back their lyrics. Savouring that sweet sound of a crowd singing, David Whelan strutted about the stage spiralling and dancing to the freedom this live setting finally provided. A memorable set from an exciting indie-pop band with a bright future ahead of them.

After teasing us with an appearance during Wyvern Lingo’s performance, Denise Chaila triumphantly took the stage. Her larger than life persona and artistic talent was simply awe-inspiring. Enhanced by deft production and ear-worm melodies the artists sleek, eloquent lyrics fluidly flowed off her tongue with ease and expressed empowering confidence that was admirable. The catchy rhythms proved too irresistible for the audience to resist, they started dancing ecstatically, strutting about and twerking relentlessly. Chaila had some tricks up her sleeve as well with guest appearances from Wyvern Lingo and Jafaris along with a new single performance from God Knows. The crowd loved every minute of this set, where artists of various genres joined forces and musical talent to create a special performance that was simply goosebump worthy.

Before Gavin James brought the festival to a spectacular end it was Lyra’s time to shine. Lyra’s charming, lavish alternative pop sound and grand production had the crowd enamoured. They cheered whole-heartedly as her magnificent vocals soared to celestial heights. The artist’s immense musical talent was on full display within her set and featured many poignant moments of musical prowess that was utterly breathtaking.

Gavin James created a mixed bag of emotions within his set. His heartfelt tunes were met with swaying, singing, and couples embracing as well as a dancing frenzy. James’ songs exude an earnestness that hits to the core and stirs emotion within the listener. This sincerity mixed with his expressive musicianship and driving instrumental sound created a timeless moment for fans to experience with their friends and loved ones. Fireworks brought the evening to a beautiful end.

The Kilmainham music festival was a joyous occasion filled with hope and love for live music. It was an evening of fantastic music that hopefully marks the return of Ireland’s vibrant and exciting live music scene.

Dave Grohl Reflects On Writing A Book In “The Storyteller” Trailer