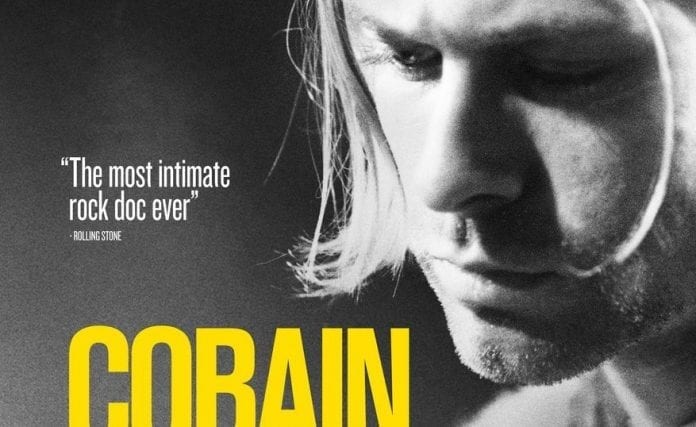 The Kurt Cobain documentary Montage Of Heck had its Irish premiere on Saturday evening as part of the Dublin film festival.

The film left many people in awe, seeing video footage of this ‘musical icon’, apparently off his face on heroin, holding his child and nodding off, isn’t something Nirvana fans have seen before.

Of course we all know the facts of his drug addiction, however to see it on camera is really something, the reality of a strung-out rock star, with an anorexic figure, balancing his daughter Francis on his lap, while she gets her haircut, isn’t what springs to mind, when thinking about one of the most influential figures in rock history.

Montage Of Heck differs greatly from many other documentaries and films about the Nirvana frontman. Any programmes i’ve watched on the Seattle grunge group or on Kurt haven’t included many of the elements that make Montage Of Heck such a unique piece of film-making.

Home-videos dominate the documentary, footage of Kurt as a baby set the movie in motion. It’s the first time i’ve seen his mother, Wendy O’Connor, father, Donald Cobain and sister, Kimberley Cobain interviewed. They obviously speak glowingly of him as a child, describing him as an extremely caring and nurturing boy.

His teenage years after his parent’s divorce (when Kurt was 9 years old) were to be the building blocks for some of the most potent emotions that drove his music, attitude and ambition. Kurt’s mother Wendy said he was “ashamed” when his parents got divorced. A sometimes trivialised emotion, ‘shame’ was an extremely powerful driving force behind the making of Kurt and it’s displayed throughout the film.

Other pieces on Cobain don’t capture the same intimate feeling as Montage Of Heck. Nick Broomfield’s controversial 1998 documentary ‘Kurt & Courtney’, is certainly an interesting watch, but it steered more towards the salacious rumours, like Courtney wanting to have her husband killed.

The other major piece on Cobain was Gus Van Sant’s very personal, yet speculative ‘Last Days’. The singer was played by Michael Pitt, ‘Last Days’ shows the imagined final days of the reclusive star in his secluded Seattle home before he shoots himself with a shotgun.

Neither of these movies had permission to use music by Nirvana, even when Pitt plays an improvised solo jam session and performs an excellent song ‘Death To Birth’ with the lyrics “It’s a long lonely journey from death to birth,” his best Cobain impression, doesn’t come close to the real thing.

Watching footage of Kurt, while actual Nirvana songs play over the pictures, take this documentary to the next level. One scene that stands out is a voice recording Kurt made telling the story of his first ever suicide attempt aged 14. As the haunting ‘Something In The Way,’ plays over an animation of the story, Kurt says that he placed a concrete block over his legs and laid down on a train tracks as a speeding train came towards him. Just as the train approached the fourteen year old Cobain, it switched tracks, avoiding the shaken teenager by inches.

As a portrait film of an icon, director Brett Morgen doesn’t pull any punches, he holds a mirror right in front of Cobain and displays all of his ugliest traits. In one disturbing story, again told in Kurt’s own words, a ‘Scanner Darkly’ like animation, depicts how he manipulates a young overweight girl to have sex with him. Kurt describes the girl as possibly intellectually disabled or “retarded.” He coaxes her into bed so he can lose his virginity. These are the types of stories you wouldn’t want people to ever know, shameful acts, that show the most hideous sides of a person’s personality.

What drew the most gasps from the audience, was the confession by Courtney Love, that she took heroin while she was pregnant with her daughter Francis. There was obvious discomfort watching an apparently drugged out mom and dad play with their new baby girl.

Director Brett Morgen said: “I do feel that Kurt’s heroin use has been slightly romanticised, so there’s a moment or two in the film where you see the reality of it. It’s not the point of the film, but i’m optimistic that there will be certain people who’ll see this film and decide that they’ll never touch heroin. And i don’t know a better legacy for Kurt than to save a life.”

Morgen spent 12 years researching his subject and it shows, constant diary entries are displayed throughout the film, trying to capture and explain what his feelings were on the subject of fame, drugs and death. Pictures appear on screen of handwritten notes from his diary, Kurt writes he wishes he was dead, seeing the words ‘i should get a gun a shoot myself’ are extraordinary to read, especially since we all know how this story is going to end.

There are many funny scenes to balance out the heavier topics. It’s underestimated how funny Cobain actually was. His wit stays mostly dormant, as he sits constantly bored with repetitive interviews with music magazines and television stations.

In one exchange with Courtney, during a sound check, Love approaches the stage, Kurt shouts that she should wear her hair straight (her hair was curly) because she has a round face. She storms off backstage like a spolit child, feeling ridiculed with the implication she looked fat.

There are home-movies of Kurt, Courtney and Francis genuinely experiencing loving family moments. A bathing scene with mother and daughter, is exceptionally loving and shows the intimacy of a family desperately trying cling to normality.

One of the simplest, most enjoyable parts of the film are alternate shots of Nirvana videos we all know so well. Before a montage of the ‘Smells Like Teen Spirit’ video, a diary exert, inspired by the the 1979 movie ‘Over The Edge’, mentions ideas for the video. A school gym, anarchy, cheerleaders are all listed. As a children’s choir sings an eerie version of ‘Teen Spirit’, over a collage of behind-the-scenes shots, the familiar pictures of the iconic video are given a completely fresh feeling for an oh so recognisable music video. The same thing happens during Nirvana’s most famous live performance MTV Unplugged, Kurt asks his friends to sit in the front-row because he doesn’t like strangers.

The final act of the film focuses on the failed suicide attempt by Cobain, months before his eventual death. Courtney recalls the story in bewilderment, stating that Kurt had sensed there was something wrong with their relationship. Love then admits to thinking about cheating on him while in London, but insists that she was never unfaithful to him. Just the thought of his beloved wife cheating, caused Cobain to down 63 pills, ending up in a coma in a hospital in Italy.

Montage Of Heck ends rather abruptly, not covering any of the aftermath of the singer’s suicide. This isn’t a criticism, we’ve witnessed everything that happened since his death, the crime scene photos, the conspiracies, the rumours and myths. Montage tries to present a more complete and complex look into an extraordinary human, his shortcomings, his genius, his flaws, his insecurities, his hopes but most importantly how he became the man he was and what inspired his lasting body of work.

The Flaming Lips Held A Space Bubble Concert At The Weekend