Home Music Review: Would We Go To Imagine Dragons Again? 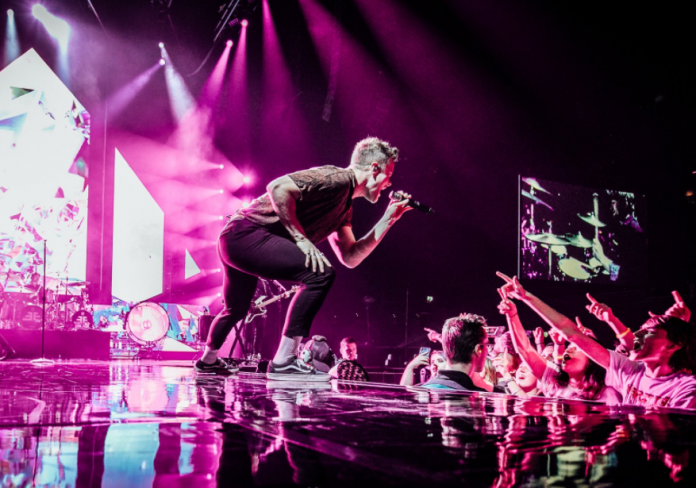 Hell to the yes people. What a gig – we genuinely weren’t expecting what we got and we can safely say we’ll be returning to see Imagine Dragons the next time they’re about.

From the get-go the band exploded onto the stage with Dan making an instant impression with the audience to kick-start their Evolve tour.

Lead singer, Dan Reynolds, took the opportunity to speak out to the crowd about his feelings on America’s political system and how the band’s hope was that every member of the audience could enjoy the night by having a sense of freedom.

But it wasn’t that type of rant where you wanted him to shut up – he actually spoke to an audience who wanted to listen to his views and we’re pretty sure everyone wanted the opportunity to be free last night.

One of the highlights for us was Wayne Sermon’s guitar solo during I’ll Make It Up To You, that guy is incredible!

The band spoke of the ‘culture’ and experience they wanted their fans to have, one where everyone was full of hope, peace and love which ironically the lead singer alluded to finding love songs the most difficult for him to write.

What an amazing gig tonight in the @3arenadublin so good to see @Imaginedragons in actions – what a performance #EvolveTour pic.twitter.com/WY2xUGxy7u

At one stage we genuinely felt we were watching the gig on TV as the sound and effects were perfection while the 3Arena was pure electric.

A passionate speech about Dan’s suffering with depression revealed the basis for Demons before the band took into the song with perfection and don’t even get us started on the last quarter of the show when Walking the Wire, Believer and Radioactive blasted the room – exceptional.

What we weren’t expecting though was the amount of young children in attendance. Like not just teens, we’re talking five and six-year-old with their parents!

With the band’s universal genre its evident they’re going to appeal to a varying audience but we were still a little taken aback to see so many random families sitting in line with hard-core rockers!

The Las Vegas four-piece sure know how to put on a show and that they have done. They get 9/10 from us – if you get a chance, just go, you won’t regret it.