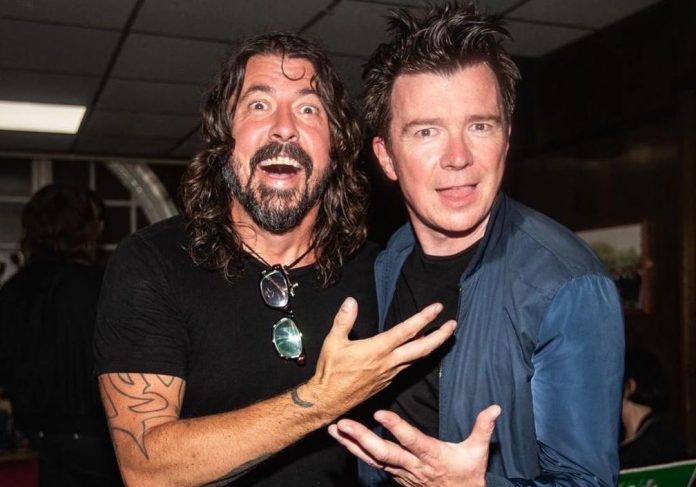 Rick Astley wants to release a charity single with Foo Fighters! It seems the never gonna give you up star is eager to work the rockers.

The singer was invited by Dave Grohl to join them on stage at Japan’s Summer Sonic Festival last August.

That’s when they covered Nirvana’s ‘Smells Like Teen Spirit’ before breaking into Astley’s well-known hit.

Since then they’ve gotten together on a number of occasions, including this summer at Reading Festival, and a performance at Club NME.

Here’s a few more pics from an epic Friday night in London with Dave Grohl and Rami of the @FooFighters #foofighters 🤘 pic.twitter.com/ldgv8yRc3W

Speaking to the Daily Star, Astley says he wouldn’t say no to collaborating to the studio:

“I would be well up for releasing it, maybe for charity one day. I’ve done it three or four times now but it’s always an accident. It ­exists in an alternate universe.”

Mr Astley has just launched his third alcoholic beverage with Mikkeller brewery. The singer is also planning to send a crate of his new ‘Astley’s Amber Ale’ to Foo Fighters’ studio while the band continue work on their new album.

“Dave Grohl likes beer. I will send a box to their studio in LA while they are recording, ” he said. The Never gonna give you up singer is still mystified as to why he was invited to perform with Dave Grohl and co:

“I never met them [before], I have no idea why he’d invite me onstage. I didn’t know what it was all about. And then he just kind of whispered and said, ‘We’re doing your tune, but we’re gonna do it like ‘Teen Spirit”, and that was it. And off we went.”

Astley said he would love to work more seriously with the band in future: “I am going to try and write with some other people because I want to experience that.”

Robert Plant Reveals The ‘Most Difficult’ Song He Has Ever Had...