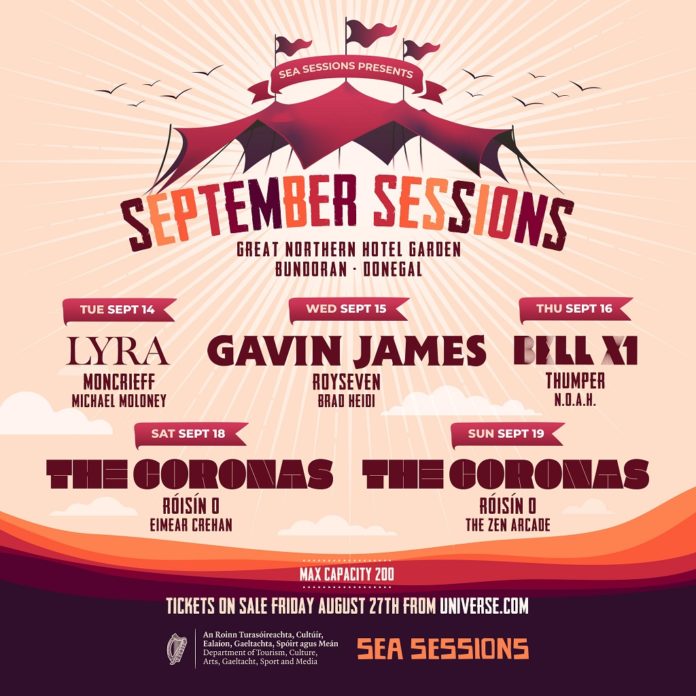 The team behind Sea Sessions have announced ‘September Sessions’, a series of 5 intimate concerts set to take place in Bundoran, the home of Sea Sessions next month.

Set on top of a cliff top in the stunning grounds of The Great Northern Hotel, ‘September Sessions’ features a brilliant line up including Gavin James, The Coronas, Lyra, Bell X1, Moncrieff, Royseven, Róisín O, Thumper and much more.

September Sessions will run from 14th September to 19 September 2021, with the intimate covered outdoor concerts having a limited capacity of 200 per show.

Speaking about September Sessions announcement, Promoter Ray O’Donoghue said:“We are really grateful that we can operate this series of outdoor gigs with the help of the department of arts and culture.

The lineup of acts and the setup will be second to none and with a limited capacity of only 200 tickets per show it will sell out fast. All the same it will be great to see some amazing artists and crew back doing what they do best. We can’t wait”

Watch Queen And Adam Lambert Perform ‘The Show Must Go On’

Dave Grohl Spotted On Set Of Film About His Own Life