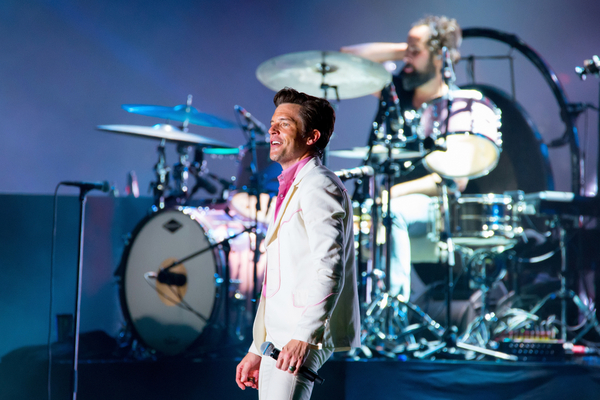 Since live music resumed in the US earlier this summer, several concerts have been cancelled or postponed for COVID related issues.

Saturday’s NYC Homecoming Concert was cancelled not by the virus but by a hurricane warning.

The event initially kicked off as planned with 60,000 assembled in New York’s Central Park for a concert that should have been headlined by Bruce Springsteen and Paul Simon.

The crowd got to enjoy performances by the likes of Journey, LL Cool J, Santana and Barry Manilow before the severe weather warning forced organisers to call off the remaining appearances.

“Due to approaching severe weather, all persons should move quickly and calmly to the nearest exit and proceed to your vehicles and protected areas outside of the festival site,” concert-goers were instructed by screens in the park. “Please seek shelter for your safety.”

One act to miss out on performing before the crowd was The Killers.

Determined to play some music, the band put on an impromptu backstage performance in their dressing room. Acoustic versions of Mr. Brightside, Read My Mind and Human were played for the small audience backstage. CBS This Morning anchor Gayle King captured some of The Killers’ performance, which was Facetimed live on CNN.

You can watch some of the footage in the videos below.

Just two days before the aborted NYC Homecoming Concert, The Killers played what should have been a warm-up for the Central Park showcase.

The band used a show on Thursday night at New York’s Terminal 5 to give live debuts to In the Car Outside and Sleepwalker, two tracks from their new album Pressure Machine.

A selection of tracks from The Killers’ 2020 album Imploding the Mirage were also played, along with classics from their back catalogue like Mr. Brightside, Smile Like You Mean It and Human.

Last week the newly released Pressure Machine became the band’s seventh album in a row to take the number one spot on the UK album chart. All of The Killers’ studio albums have now managed to reach the UK top spot. They become the first non-British act to do so with seven albums.

Frontman Brandon Flowers recently spoke about how divided America has become over the issue of wearing masks to prevent the spread of COVID-19.

“It became a political statement if you wore a mask, and I was laughed at in gas stations for that,” he said. “That’s calmed down a little bit, but it’s still scary to know how quickly we can be torn apart.“