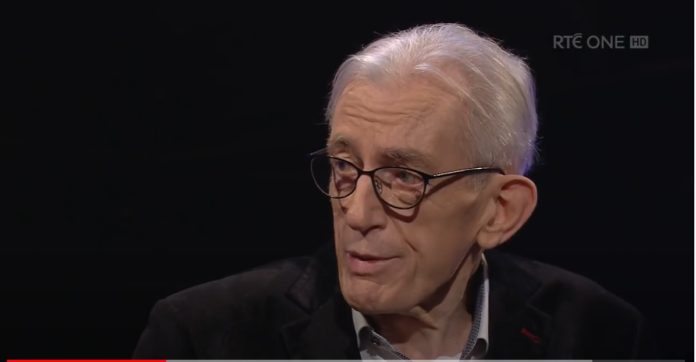 Speaking at his father Shay Healy’s funeral, Fionan said that his “legend will live on”. The legendary Eurovision songwriter was laid to rest yesterday, having passed away last Friday aged 78 following a long battle with Parkinson’s.

He was given a farewell at Mount Jerome in Dublin in a humanist ceremony.

Those that attended the service included Shay’s family along with Riverdance producer John McColgan who was also a friend of Healys. Musicians Paul Brady and Jimmy Smyth played music at the service.

“Always managed to bounce back”

Speaking at the service, Shay’s son Fionan said that that even in his final few weeks, his father “Shaymo” was still working.

“He was still at it, just couldn’t stop. He got knocked back so many times but he always managed to bounce back and move onto his next idea”.

Fionan continued, “I think he had so much creativity in him, he knew his time was probably short and just wanted to get everything out that he had inside him”.

“He was non-stop writing songs with friends, working on new music and up until late last year he had us all driven demented with his unpublished book about his adventures in New York”.

Shay Healy is known for writing the 1980 Eurovision classic for Johnny Logan “What’s Another Year“.

His son said this. “I really don’t think I can express how much he loved music but will be remembered for eternity”.

Shay Healy also hosted the show Nighthawks. During an interview on his show, former Justice Minister Sean Doherty spoke about phone tapping, which led to Charles Haughey announcing plans to resign as Taoiseach a day later.

During the service, Fionan also spoke about his father’s achievments and how he loved his interviewing skills.

He said, he could have talked to a wall and he would have got its “life story”.

Adding, “Nighthawks was a massive point in his life and I remember the pride I had when he would go on and how hard he had worked to make it happen”.

Shay Healy went into care at Four Ferns in Foxrock last year. While in there, his son recalled how he was able to do a gig!

“I’d say it took him three days before he was lord of the manor. He didn’t want to be as isolated as he was but he made the best of it and brought his amazing charm and character”.

“It was probably a month before he was doing his first gig and I think it probably frightened the life out of him but he was doing it anyway”.

Fionan also added, “It was amazing. He shook it up and that’s what he does. He was just an amazing character”.

“Shay loves his kids, he loves his grandchildren and kids everywhere. He always saw huge potential in their eyes. He was the biggest kid, the messer with the biggest heart”.