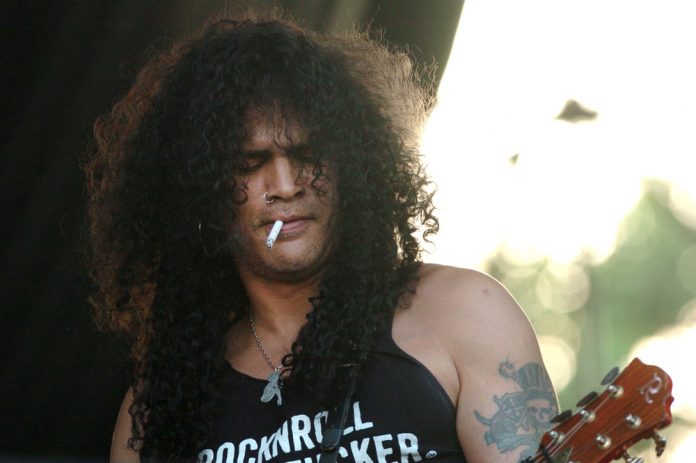 Slash remembers the time he escaped fines for smoking in U.K. venues before he managed to finally quit the habit back in 2009. The GNR axeman also explained that he never thought the law would be a success.

Slash faced a penalty of £100 for each time he offended during a solo tour. That was after the UK banned smoking in enclosed working spaces including venues in 2007. Slash was speaking to Marc Marron via Ultimate Classic Rock,

“I chainsmoked and I couldn’t handle — this is not why I quit smoking — but I couldn’t handle not being able to smoke wherever I wanted. I was smoking at gigs, and I was on tour in the U.K., and they told me, ‘The smoking ban’s coming,’ I said, ‘You guys are gonna have some serious problems. … You know they’re gonna riot. It’s not gonna work.’

“And so we finished the tour, and I came back maybe six months later, and they had passed this thing. And it was people sitting outside all smoking their cigarettes with their cocktails, and they were sitting on benches. And some hotels had put monitors outside so you could watch TV and smoke, and they just went down quietly. And it was, like, ‘Wow!’ No repercussions whatsoever — no violence, stoning or anything.”

Slash explained that he faced multiple fines for smoking in the UK,

“They were trying to fine me for every cigarette I smoked on stage. So it was, like, a hundred quid for every cigarette,” Slash said. “So, we had to make up a bunch of stories, and we got out of it. But I couldn’t believe it had gotten to that point.”

Slash quit smoking after his mother died of cancer, but admitted it was very “tough” to keep off the fags.

“You’ve got these triggers all the time,” he explained. “They only last for maybe two seconds or so, but they’re really, really potent. And you can just get it watching somebody smoke on TV. I saw somebody smoking at a bus stop, and I said, ‘Ohhh…’ It happens at least once a day every day.”

Irish Artists Are Coming Together For One Night Only Concert