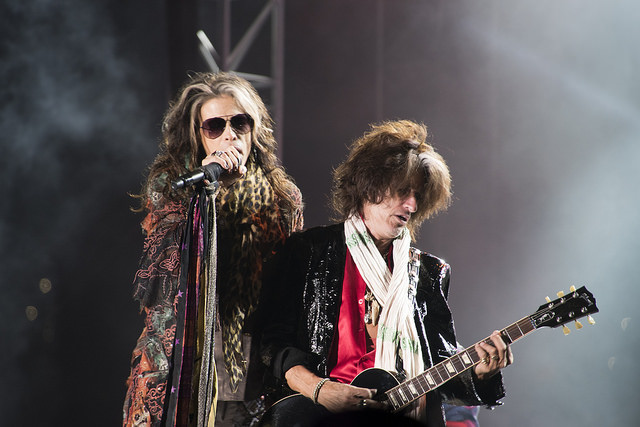 Aerosmith frontman Steven Tyler has revealed that Dave Grohl is his hero. In a new interview with Rolling Stone, Tyler spoke about who his hero was among many other topics

Tyler spoke about the secret behind Aerosmith’s longevity, the coolest car he owns and why he and Dave Grohl are “birds of a feather” in the interview.

Steven Tyler first spoke about the pros and cons of being in the public eye. In terms of the pros he said “I love being loved by people that love the songs that my band loved enough to record,” but on the flip side he said “I have a great T-shirt that says GO FUCK YOUR SELFIE that I walk through airports with.”

When asked about all the attention he gets on the street, Tyler came up with the perfect description of it. He said “Sometimes, you’re in the gym at 7:30 in the morning, and you haven’t had your coffee and everyone you meet is like, “Oh, my God!” It’s like getting pecked to death by chickens.”

When he was asked who his hero was Steven Tyler said “There’s so many, but really anyone that survived trauma. People like Dave Grohl. He could have gone the way of the rest of Nirvana, but he came out from behind the drums and became a guitar-playing lead singer. The two of us are birds of a feather. You won’t meet two more country, down-to-earth, help-my-wife-make-the-pie type of people than myself and David.”