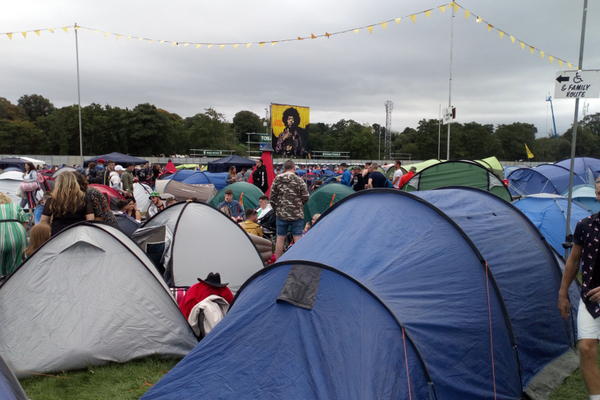 The locals of Stradbally have raised concerns over plans for the town to hold Electric Picnic there this September. Experts fear the majority of the festival’s 70,000 crowd would be generally in their 20s, and will be highly unlikely to be vaccinated in time.

A decision is to be made on the festival, which has sold out, by the end of the month, as it generally takes two months to set up. COVID fears have already cancelled various other festivals, including Longitude, Body and Soul, Forbidden Fruit, Ploughing Championships, and even the Rose Of Tralee.

It is still unclear as to whether August bank holiday’s All Together Now festival, featuring Underworld, will go ahead. With Electric Picnic organisers yet to announce the complete lineup, they are looking at similar events planned in the UK at the same time. Among those artists mooted for attending Stradbally are James, Gerry Cinnamon, Stereolab, Example, Sean Paul, Future and Skepta.

However, a local Stradbally councillor is insisting that locals do not want the festival to go ahead this year. Speaking to the Sunday World, Fianna Fáil Cllr Paschal McEvoy claims older people “in the area are terrified at the very mention of it”.

“We would rather give it a miss this year as it’s better to be safe than sorry. The Ploughing Championships were meant to be three miles down the road in Ratheniska and that has been cancelled.”

Cllr McEvoy admits it would be a tough decision to cancel this year’s Electric Picnic as “a lot of money is raised for local charities, ­particularly St Vincent de Paul, from the event. There are also a lot of local people at it and it brings a lot of money into the town.”

However, McEvoy wants the Stradbally festival to be cancelled for a second year in succession to, “hopefully, have brought this COVID to a place where we can be comfortable and safe”.

“This crowd of 70,000 would be ­coming from all corners of the country and could potentially be bringing the virus to our town, and not only that; they could be catching it from others at the event and bringing it back to their own hometowns. To hold it in early September is not safe in my opinion and is too much too soon.”

The Sunday World state that no response has been registered by Electric Picnic organisers, when asked of their plans. However, Junior Minister Seán Fleming has been informed that the event will not take place on a reduced capacity basis. Fleming spoke with Festival Republic boss, Melvin Benn – who runs Electric Picnic – who said the Stradbally festival had sold out, making it not “financially viable” to have a smaller crowd.

“He said they need to know by the end of June, to allow a two-month lead-in to confirm the acts and prepare the site,” Minister Fleming added. Some locals who took to Facebook were mostly in favour of cancelling this year’s festival. “Not a hope this should go ahead, makes no sense at all. I hope the town comes together and makes sure it doesn’t happen this year.”