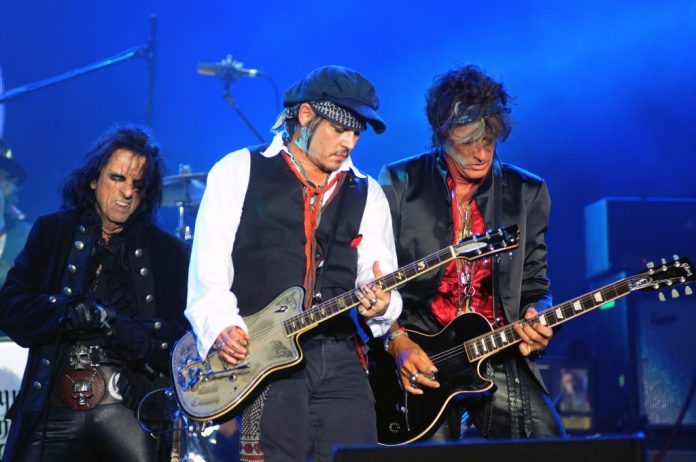 Supergroup ‘Hollywood Vampires’, which is made up of Aerosmith guitarist Joe Perry, Alice Cooper and Johnny Depp, have just announced that they will be going on tour. It will be a UK tour, making it the band’s official UK debut. They will be joined by very special guests, The Damned and The Darkness.

‘Hollywood Vampires’ began in the 70s in the Rainbow Bar & Grill’s upstairs’ bar, and has seen numerous stars enter.

Founder Alice Cooper explains how the club worked: ‘To join the club, one simply had to out drink all of the members. I would walk in on a typical night and John Lennon, Harry Nilsson, Keith Moon—who would usually be in a costume like a maid or a chauffeur—Bernie Taupin, Jim Morrison and Mickey Dolenz would be there. The next week might be Bernie Taupin, Jimi Hendrix, Jim Morrison and Mickey Dolenz.’

Johnny Depp also spoke of the upcoming tour: ‘there will be rumbling in ears and there might be blood trickling out of one ear.’ With Perry adding: ‘I don’t say things like this often, but this band is (bleeping) good.’

The band will only be playing gigs in the UK, but if you fancy catching a cheap flight over, here are all the details you need:

Tickets will be on sale at 9am this Friday, February 9th from here!