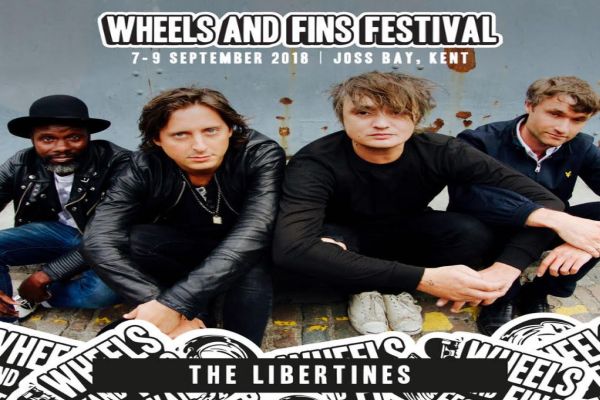 Rock band The Libertines are set to headline their own festival day, supported by the likes of Echo and the Bunnymen and Chas and Dave! Pete Doherty and Carl Barat will be taking over one day of the established Wheels and Fins music festival in Kent. The band have curated their own line-up for the main stage.

The band hopes that their festival named Sharabang, will become a regular event. The one-day takeover of the festival happens on September 9 th at Joss Bay Beach in Broadstairs.A stone’s throw from The Libertines new hotel and studio The Albion Rooms in Margate. Taking to Twitter the band said, “We’re taking over the Sunday at @WheelsandFinsUK, claiming and curating it in the name of #Sharabang… a vehicle for music and merriment on a whole new scale for us as a band.”

We’re terribly excited to play curator at @wheelsandfinsuk. It’d be an honour to see ya there 👉 https://t.co/nZyISeLgQ5 pic.twitter.com/x8IL2gmhdA

Liverpool’s Echo and the Bunnymen were had picked because they are a “favourite” of Doherty and Barat, and Cockerney pub-pop-rock duo Chas and Dave are “treasured” by the band. Reverend and The Makers, indie rockers band Cabbage who are well worth checking out and rapper Mic Righteous from Margate are among the guests. Pop trio Lock and rising stars Zuzu, complete The Libertines’ support act line-up.

Doherty and co have also have invited Tim Burgess to host the second stage as Tim Peaks. Deja Vega, Blackwaters , Average Sex, Autopilot, Meister and Delights will all perform on the stage. In a press release, Burgess said: “The Libertines love Tim Peaks and we love them. It was an honour to be asked by the boys to bring our travelling circus to the festival. As ever, it’s all about fantastic bands, damn fine coffee and maybe a few surprises too.”

The Libertines have two local Kent charities on board for the event. Thanet-based The Aspirations Healthy Living Centre, which provides the local community with a one-stop facility for health services, and a charity which offers free accessible music and arts workshops for young persons across East Kent, called Pie Factory Music. Also playing at the festival across the weekend are Faithless, who will be playing a DJ set, and Welsh rockers Feeder. The Wheels and Fins festival is now in its sixth year, runs from September 7 to September 9th.

Meanwhile, Echo & the Bunnymen have announced a series of UK and Ireland tour dates this autumn. In Dublin they will play the Olympia Theatre on Friday the 12th of October.

Liam Gallagher Talks About Future Of His Relationship With Daughter Molly