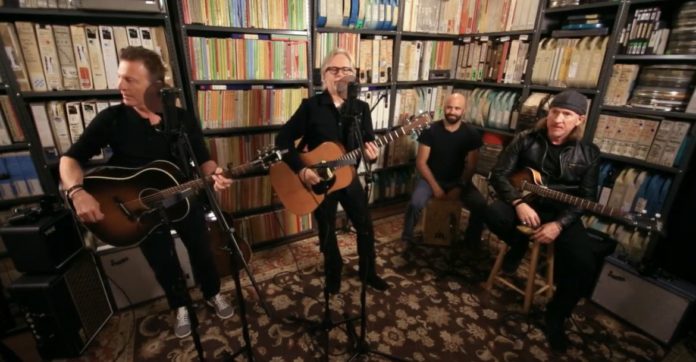 The cast of the hit sitcom from the 90s and noughties Friends reunited for a much anticpated reunion special this week. Check out the sitcom’s theme track, being peformed on the David Letterman Show by the Rembrandts below.

Hosted by James Corden, the cast of Lisa Kudrow, Courteney Cox, Jennifer Aniston, Mathew Perry, Matt Le Blanc and David Schwimmer got together to discuss their time on the show which finished in 2004.

The reunion show was also directed by Ben Winston. Winston was also co-executive producer alongside the original producers. They were Marta Kruaffman, Kevin Bright and David Crane.

The theme song for the show was “I’ll Be There For You”.

The track was put together by The Rembrandts. Following the success of Friends in the 90s, the band released the track for a second time as a bonus single on their 1995 album LP.

Following that release in ’95, the song stayed top on the Billboard Hot 100 Airplay Chart for two months, peaking at number 17.

Check out the band’s performance of the track in June 1995 on Letterman below.

They began by singing a section from the I Dream of Jeannie theme. Their single was peaking and the CD was selling like hotcakes in malls.

The band split up not long after that release and when they returned in 2001, they released a CD without the track on it.

The Rembrandts still continue to record and occasionally sing live to this day.

“Will never be forgotten”

Members of the band, Danny Wilde and Phil Solem are credited with the theme track. The have previously admitted to benefitting financially from the track.

“Let’s just say I’m not going to retire on it, but I’ve managed to put both my kids through college”, Danny Wilde told the Independent in 2011. “We get paid for performance, which means we make something every time it’s on TV, but we never got publishing royalties”.

“With the repeats, that show is sure to outlive me”, Wilde added.  “But I guess that’s kind of cool, isn’t it? That way, the Rembrandts will never be forgotten”.

Here’s the Rembrandts’ performance of “I’ll Be There For You” from the Letterman Show in 1995. They were also backed up by Paul Shaffer and the CBS Orchestra).