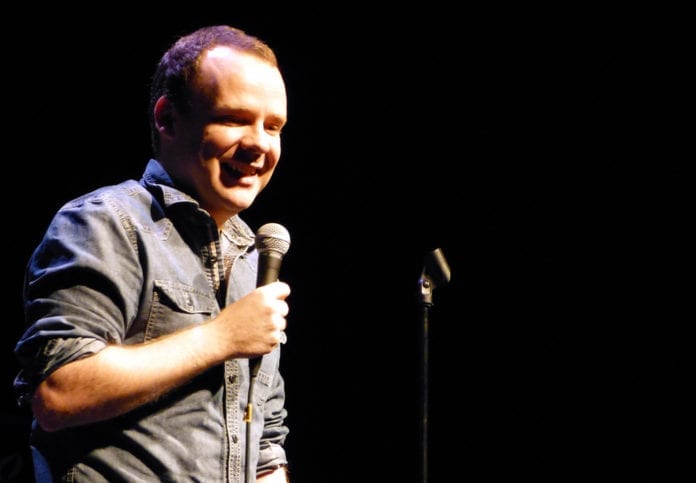 At a loss for what to do this weekend? Want to go out but don’t know what’s on? Sure Nova has you covered! There’s comedy with Neil Delamare and The Comedy Crunch. And music from U2 and Damien Dempsey. And lots of other events too!

Neil Delamare takes to the stage for a third night at The Viking Theatre for ‘The Butch Cassidy and the Sundance Pensioner’. Neil previews his brand new show before taking it to Edinburgh Fringe 2017. €12 booking 0871129970. Doors are at 8pm.

Damien Dempsey plays The Iveagh Gardens tonight with special guests. It’s All Good, the first compilation of this kind from the proud Dubliner, and one that attempts to encompass his entire career into a the space of a double album. Doors are at 6pm, tickets are €40 plus additional charges.

Bicurious play upstairs in Whelan’s. Bicurious are a confused, loud, instrumental and experimental duo from Dublin, Ireland and Brest, France. Doors open at 8pm and tickets are just €5!

This is an art event which opens this Saturday in Inspire Gallery, Gardner Street at 7pm. Young artist Hannah Martin is trying to help raise awareness of the Forgotten Mothers and our children.

U2 – The Joshua Tree Tour

U2 play their massive sold-out The Joshua Tree Album gig in Croke Park tonight. Live Nation today announced that U2 will return to select stadiums, including Croke Park, this year with The Joshua Tree Tour 2017, in celebration of the 30th anniversary of the band’s seminal album. Tickets are like gold-dust for this one! Doors at 6pm.

Lumo Club  is on tonight in Yamamori Tengu. Lumo is a house party in a club vibe with no restrictions on genre. Lumo is a club for dancing featuring a good sound system, a decent bar and DJs in the corner playing classics and curveballs. Doors are at 10.30pm and tickets are €5/€10.

The Kildare Branch of Alzheimer’s Society of Ireland Walk

The 17th annual sponsored 5k walk will take place in Robertstown on Sunday 23rd of July. It kicks off at 11am at the Traveller’s Rest. Sponsorships are available from Clare McNally & Ursula Nolan in Newbridge, Terry Conlan in Rathangan and Leo Murphy in Naas.

The Bray Air Display continues today. Along with the Air Display, there will also be a family day event at Weston Airport. This event gives families the opportunity to see the aircraft in a quieter, family-focused setting. You will also be able to see the aircraft close up. There will be free access to the viewing areas such as Darby’s Restaurant and paid amusements such as a guided tour of the aircraft taking part in the air show. The event kicks off at 10am, ongoing until 7pm.

The Comedy Crunch takes place at The Stag’s Head tonight with David Tsonas and Jarleth Regan performing. StandUp Comedy in the downstairs bar in The Stags Head Dublin. Doors open at 8:15pm, and the show starts at 9pm. FREE ENTRY & FREE ICE-CREAM!!

Whatever you end up doing with your weekend, we hope you have a good one! Don’t forget to tune into NOVA, bringing a diet of guitar-based music to Dublin, Kildare, Meath & Wicklow.

NOVA is available on Facebook, Twitter and here on our website – www.nova.ie. It can be received on 100.3FM in the Greater Dublin area and can be received nationwide on its Smartphone apps and via the Irish Radio Player.

Medical Help On Hand For Drug-Users At Electric Picnic