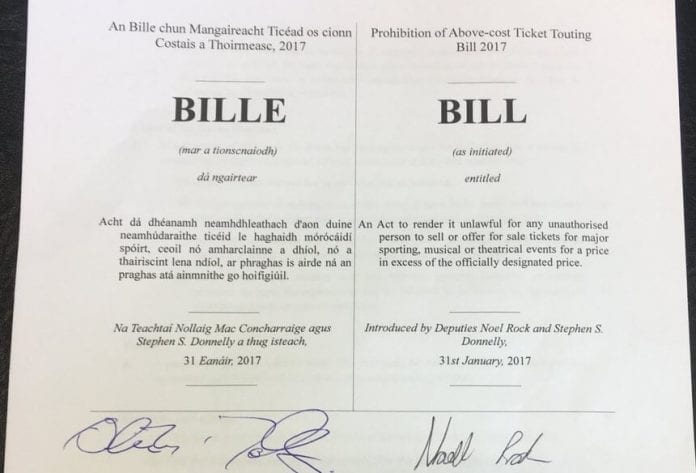 Following the delivery of our petition of nearly 5000 signatures from Radio NOVA listeners, on Tuesday January 31 a new Bill was officially introduced to the Dáil to ban the resale of tickets above face value.

The new legislation to tackle the scourge of ticket touting was proposed because of the petition that was started following the recent outcry over U2 concert tickets which were offered for sale on secondary sites for multiple times their original value immediately after the gig sold out.

Hundreds of NOVA listeners contacted the station after they were left fuming after thousands of tickets turned up on resale websites within seconds of Croke Park selling out, with some selling for over €1,000.

In a first for the Dáil, the bill was sponsored by TDs from two groups – Fine Gael’s Noel Rock, and independent TD Stephen Donnelly.

The proposed bill aims to prohibit the resale of tickets for concerts and sporting events for more than their face value.

As the bill was being introduced the Dáil also heard claims that the revenue from ticket touting is going towards organised crime gangs around the world.

Deputy Donnelly says the funding of organised crime is just one reason to clamp down.

“There are allegations of complicity by resellers working with organised touts that are breaking the law. There were very serious allegations made, Ceann Comhairle, about links between profits being made in this industry and Dublin-based paramilitaries and indeed armed organisations in Israel. So we need to take the issue very, very seriously.”

The Bill is being put forward just days after the Competition and Consumer Protection Commission launched a formal investigation into suspected anti-competitive conduct in the ticketing sector.

The Competition and Consumer Protection Commission said it will be looking at the operation of ticketing services for live events.

“The investigation will focus primarily on potentially anti-competitive conduct by operators including; those involved in providing tickets and ticketing services, promoters and venues”, a statement from the CCPC explained.

The Minister for Communications, Climate Action and Environment Denis Naughten said he will recommend to the cabinet that it supports the bill outlawing ticket touting. Mr Naughten and the former minister for justice Alan Shatter brought forward a similar bill against touting in the early part of the last decade when they were both Fine Gael TDs, but it did not make it past committee stage.