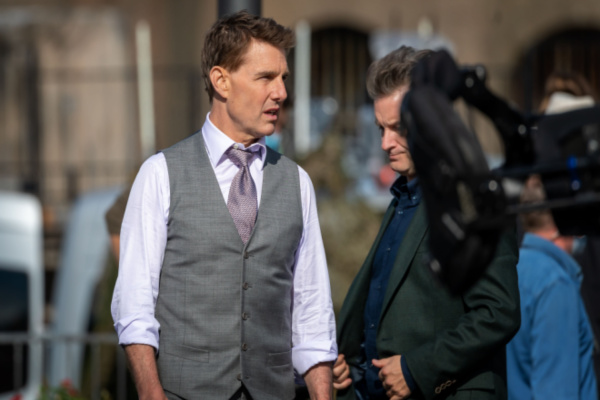 Tom Cruise celebrated his 60th birthday, by spending the day at the British Grand Prix in Silverstone.

Cruise is a regular visitor to UK sporting events, having attended the Goodwood Festival of Speed, Wimbledon 2021 and the Euro 2020 final last year.

And now, Tom Cruise has celebrated turning 60, by attending the British Grand Prix at Silverstone.

Donning a pair of sunglasses and a blue polo shirt, Cruise waved to fans at the Northamptonshire race track.

Cruise watched the race from the Mercedes garage alongside F1 driver George Russell, who was knocked out after the first lap. He also spoke to several members of the pit crew.

After the race, Cruise also chatted to seven time world champion driver Lewis Hamilton, along with his father Anthony.

The actor has spent the lion share of his time in the UK over the past two years, while promoting the latest Mission Impssible Film and Top Gun: Maverick.

On top of his 60th birthday, Tom Cruise was also awarded the Palme d’Or, the highest honour at the Cannes Film Festival back in May.

Previous winners of this award also include Jane Campion and Quinten Tarantino. The Jerry Maguire star received this honour ahead of the screening of Maverick: Top Gun.

Speaking ahead of the release of this film, Tom Cruise has insisted that Top Gun: Maverick was never going to be streamed.

“That was not going to happen, ever”, he said.“Look at us all together, we’re all united, we all speak different languages, different cultures… but we’re able to come together around a shared experience”.

Cruise also added that he is hoping to play a key part in the return of cinemas, since the pandemic.

“I go to cinemas and there’s people there who are serving the popcorn and running these theatres. I tell them: ‘I know what you’re going through, just know we’re making Mission: Impossible, Top Gun is coming out…”.

Following its release, Top Gun: Maverick also became the highest grossing film of 2022, surpassing the $1 billion at the Box Office.