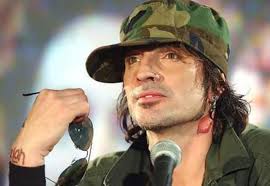 The lucky lady is a German singer that is now based in LA. She is most commonly known by her stage name SOFI, an acronym for Some Other Female Interest.

This is going to be the fourth time Tommy will have tied the knot, previous marriages were to model Elaine Starchuk, Pamela Anderson and Heather Locklear

His future bride was born in Germany and was raised within a Greek family. She started her music career at the age of thirteen. She choreographed Avril Lavigne’s hit song “Girlfriend” and was subsequently hired to sing and dance on Lavignes 2008 world tour.

In 2009 she was a back up singer for Britney Spears and she has also worked with Fallout Boy, Nelly Furtado, and Will I Am.

Tommy Lee and Motley Crue announced earlier this year that they are to split up for good and they will be having their 2 year farewell tour supported by Alice Cooper that is due to kick off July 2 in Grand Rapids, Michigan.