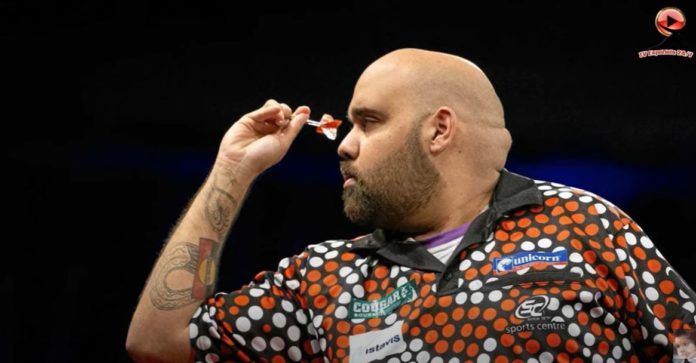 After turning professional in 2014, Anderson reached the last 32 of the PDC World Championships at the Alexandra Palace on four occasions. He was one of eight players to hit a nine-darter at the tournament.

Anderson also hit a nine darter at the 2017 European Championships semi-final. He was also joined by his brother Beau in competing at the Sydney Darts Masters in 2013 and World Championships a year later.

Overall, Anderson competed in seven World Championships and seven UK Opens, reaching the quarter finals of the latter in 2016.

Check out his nine darter at the Ally Pally here.

Anderson had returned to his native Perth during 2020 at the start of the pandemic. He also gave up his PDC Tour Card after choosing to stay in Austrailia ahead of the arrival of his second child.

Kyle Anderson was “Always fun to be with”

Numerous tributes have been paid to the late Kyle Anderson.

Three time world champion Michael Van Gerwen another player to also hit a nine darter at the tournament, wrote, “A lovely man and always fun to be with, very sorry to hear about Kyle. We had many great games and a fantastic player. A credit to Australian and world darts. RIP mate”.

Sixteen time world champion Phil Taylor also added, “What terrible news to wake up to what a nice friendly man. @KyleDarts. RIP pal. Thoughts go to all your family”.

Former BDO World Champion Steve Bunting wrote, “Absolutely gutted hearing the news this morning. RIP Kyle Anderson. The darts world hasn’t been the same with you not around brother. You always made me laugh every time we met. Never a dull moment with you around. We are all gonna miss you mate”.

Austrailian Simon Whitlock who played with Anderson when they represented Austrailia at the World Cup of Darts four times, also paid an emotional tribute. The pair reached the semi finals in 2018.

“Totally gutted to wake to the terrible news about Kyle. Not only a brilliant player but a very nice man. Many times I played against him and loved playing with him. You will be missed Kyle but never forgotten – tragic”.

Totally gutted to wake to the terrible news about Kyle. Not only a brilliant player but a very nice man. Many times I played against him and loved playing with him. You will be missed Kyle but never forgotten – tragic 🥲🌹🇦🇺 pic.twitter.com/TgYJdGHKxE

Meanwhile, the president of the PDC Barry Hearn released this statement.

“We send our condolences and best wishes to Kyle’s family and friends at this terribly sad time, particularly his wife and children”.

“Kyle’s achievements in his short-lived career were outstanding, notably his Auckland Darts Masters win, and a fitting reward for the sacrifices he made to follow his dream”.

“He was a popular player on the tour and his talent and dedication made him an inspiration to other players around the world”.

Darts referee Russ Bray also added, “I am absolutely devastated to hear Kyle Anderson has passed away. A nicer person you could not wish to meet. A lovely man and good friend. My thoughts are with his young family. RIP bud, so, so sad”.

Elton John Memoir To Be ‘One Heluva Roller Coaster Ride’