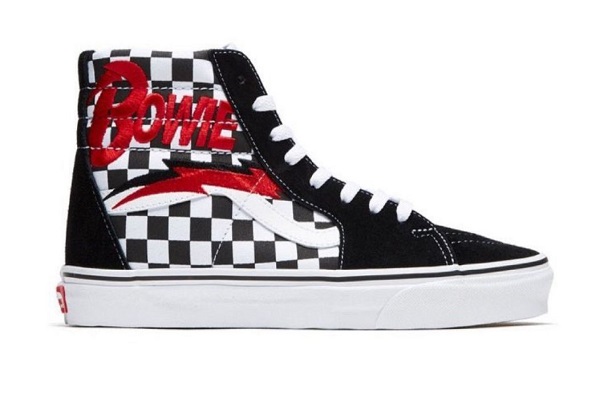 Vans have revealed a limited-edition range of David Bowie sneakers expected in stores next month.

The four designs are inspired by classic LPs of the late singer. According to UCR, four of Bowie’s classic records are the basis for the design of the new shoes.

The lightning bolt of Aladdin Sane is featured on the Old Skool model, blue polka dots and the word “Space” from Space Oddity is on the Era shoe. Hunky Dory‘s mustard yellow and typeface appear on the Slip-On.

NME estimates that the shoes could arrive as early as April 4, although UCR notes that one Twitter account says April 5. Fans can register for alerts about the shoes on Vans’ website.

The bold red typeface and lightning bolt from the Ziggy Stardust period are featured on the Sk8-Hi sneaker.

Bowie has been in the news recently. The early days of Bowie’s music career are anticipated to be the subject of a movie called Stardust. However,  Bowie’s son, filmmaker Duncan Jones, claims the estate has not authorized the film and will not allow any of his father’s music to be used in it.