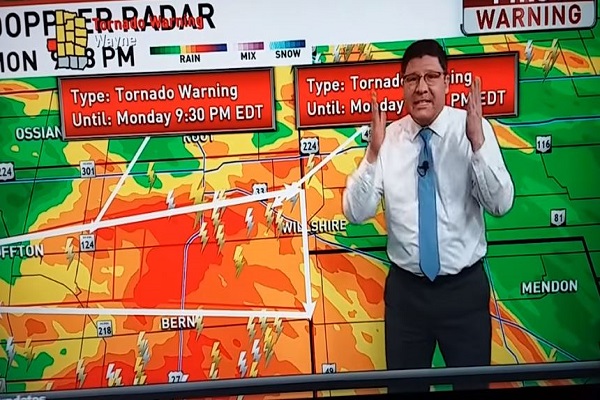 Keen Fans of The Bachelorette were a little upset last Monday when severe tornado warnings interrupted their show in Dayton, Ohio. The programme is an American reality television dating game show.

Jamie Simpson a weatherman with Fox 45 observed that Bachelorette fans had taken to social media to express their disgust at an impromptu weather warning.

It was clear the fans who were on the edge of their seats with the show were not impressed with the interruption. After he started receiving the online criticism for his weather reporting, Mr Simpson went off on one on air.

According to Mashable, a rather annoyed Simpson yelled: “We have viewers complaining already. No, we’re not going back to the show, folks! This is a dangerous situation! I’m sick and tired of people complaining about this! … I’m done with you people. I really am.”

He eventually calms down towards the end and says sorry. However, Mr Simpson had to explain to viewers that it upsets him how people don’t seem to care about the safety of others. Check out the video:

Even the Bachelorette in question has to get involved saying that there was nothing more important than being kept aware of when a tornado is heading your way!

Lolz too funny, thanks Dayton, Ohio for the love, but be safe. naders are no joke. https://t.co/RdxYOUpx4w