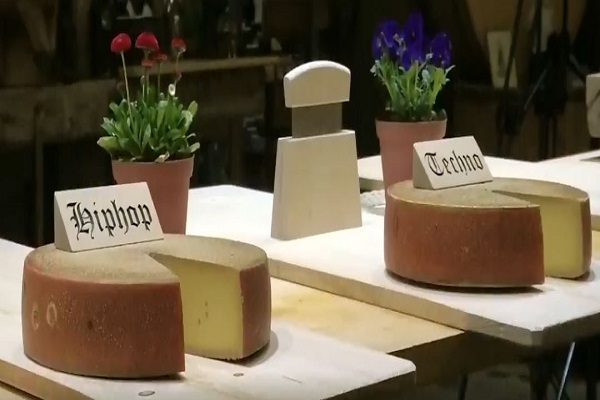 The Swiss are known as good quality cheese makers so it’s no surprise to hear reports that quality controls of their products are continually being upgraded.

According to NPR, an experiment was carried out to test the effects of music on cheese over a long period of time, to see if the quality of taste was affected!

The experiment called Cheese In Surround Sound was led by Students at Käsehaus K3 in Burgdorf and Sound Arts HKB in Bern. Nine 22-pound wheels of Emmental cheese from the same farm, all processed in the one vat were placed in nine separate wooden crates for six months.

Eight of the cheese wheels were left to mature in a controlled environment, in the background was a recorded loop of the same song playing 24 hours a day. The ninth wheel was in a control without music.

Songs included “Jazz (We’ve got it)” from A Tribe without Quest as well as Led Zeppelin’s “Stairway to Heaven,” and on a more highbrow note Mozart’s “The Magic Flute”

At the end of the experiment, a sensory consensus analysis was carried out by a group of professional food technologists. According to the cheese experts, A Tribe Called Quest proved to be most effective with Led Zeppelin’s “Stairway to Heaven,”  a very close second! Tribe over Zep? Chesus, they must be emmental!