Home Entertainment Vivarium: The New Movie About A Couple Trapped at Home! 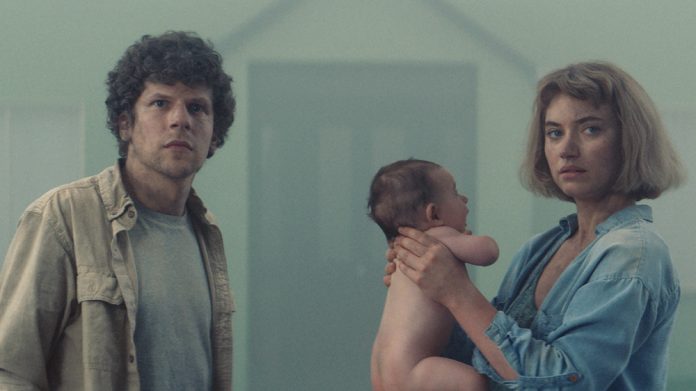 A couple find themselves trapped in the house and isolated from the rest of the world…sound familiar?

“It’s so strange. I mean, you make a movie, typically inspired by something that’s occurring in present day, and then the movie comes out a year and a half later and is filtered through whatever is happening in culture at the time which, of course, you can’t foresee when you’re making the movie,” Eisenberg told USA TODAY.

Written by Garret Shanley VIVARIUM was inspired by the recent housing shortage crisis in Ireland, according to Eisenberg.

“Now it’s coming out internationally during a global pandemic where people are isolating in their houses and also panicking about an invisible threat,” Eisenberg says. “And in some ways, the movie is more directly relevant to the current experience than it was to the experience that inspired it.”

During their search for the perfect home, Gemma (Poots) and Tom (Eisenberg) find themselves trapped in a mysterious labyrinth-like suburban neighbourhood named Yonder. All attempts to escape end in failure, culminating in the discovery of a baby on the pavement outside house number 9 with the instructions ‘raise the child and be released’.

VIVARIUM has been described as; “Reminiscent of the likes of Get Out and TV’s Black Mirror As thrillingly provocative as it is wickedly enjoyable it takes you on a trip into an unforgettable suburban Twilight Zone.”

VIVARIUM is a European co-production with Brendan McCarthy and John McDonnell producing for Dublin’s Fantastic Films along with Jean-Yves Roubin of Belgium’s Frakas Productions and Alexander Brøndsted of Denmark’s Pingpong Film.

Dating Apps Tinder And Bumble Are Banning The Accounts Of Capitol...