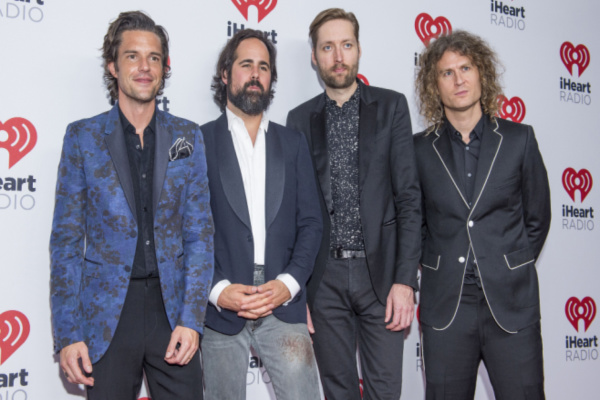 The Killers were joined by a fan on stage during their live give at Falkirk earlier this week.

The Las Vegas band are currently in the midst of their massive 2022 UK and Ireland Stadium Tour, supporting recent albums ‘Pressure Machine’ and ‘Imploding The Mirage’.

During many of these live shows, the Killers have picked a fan from the crowd to sit behind Ronnie Vannucci’s drum kit, to perform ‘For Reasons Unknown’.

At the second of two gigs for the band at Falkirk, 28 year old Kyle Grieve was given the task of starring as drummer for the track.

On the first night, Grieve who also drums for Edinburgh band Retro Video Club, had held up a sign asking to play drums for the band.

“If you want to play on this stage, you have to mean business”, Killers frontman Brandon Flowers said, pointing to the sign.

The following night, Grieve returned holding a new sign aloft, which read, “Tonight, I mean business”. To which Flowers replied, “Let him come up”.

Check out this performance for yourselves below.

Guy from the crowd asked to play drums with The Killers and this is what happened (part 1) #thekillers #Falkirk #falkirkfc #drums #centralfm #falkirkherald pic.twitter.com/jmw726OmMr

With his feet understably off the ground, Kyle Grieve called the opportunity to perform live with the Killers “a dream come true”.

“It’s all I ever wanted to do”, he said. “The Killers were my biggest influence, it’s because of them I took up the drums”.

“On Tuesday morning I had another wee practice at their songs, but I knew them all anyway. When he [Flowers] invited me up on stage, my stomach sunk, I was just thinking ‘Is this happening?”.

He continued, “He was shouting into the crowd asking me if I was Scottish and if I actually played. I never expected I’d end up on stage”.

“It’s a dream come true, I’m a massive fan, I don’t even remember playing and I’ve hardly slept, it was so amazing”.

Tonight, the Killers will take to the stage at Norwich’s Carrow Road, before the perform at Manchester’s Emirates Old Trafford on June 11. Both shows will be supported by Blossoms.

The band will hit Dublin’s Malahide Castle for two concerts on June 14 and 15, with both gigs being supported by Sam Fender.

Earlier this year, Brandon Flowers and co had released a reimagined version of their LP ‘Getting By’. More on this here.

Peter Jackson’s New Beatles Documentary Set To Be A Cracker