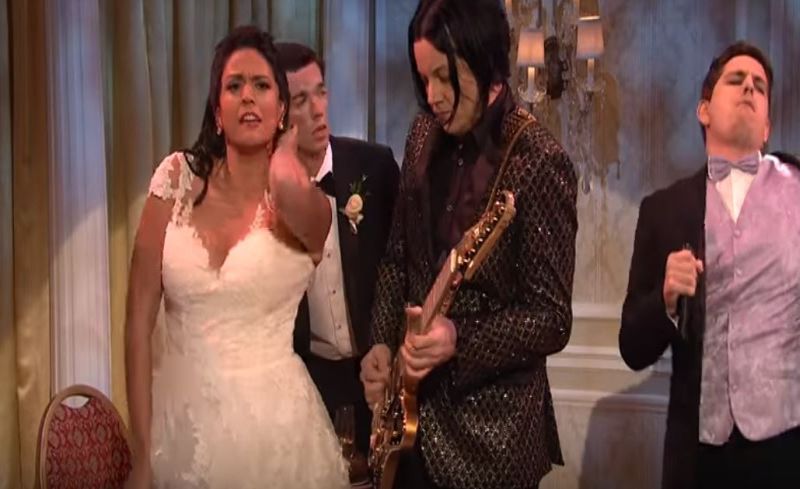 Jack White was the musical guest on Saturday’s April 14th episode of the US comedy show Saturday Night Live. The sketch was meant to be shown in the episode, but had to be cut due to time constraints.

Guest host, John Mulaney, discovers his new wife, played by Cecily Strong, is having an affair with the best man Luke Null. As the couple sing of their forbidden love they also reveal the musician was involved in a bizarre love triangle! White accompanied the lovers on guitar. You can watch the sketch in full below.

Meanhwile, Jack White’s tour in support of his new album Boarding House Reach kicks off on April 19th in Detroit at Little Caesars Arena and continues through August 23 in Las Vegas, with stops in London, Paris and Amsterdam as well as the previously announced festival headline performances at Shaky Knees (May 4-6), Boston Calling (May 25-27), and Governors Ball (June 1-3).

The recent Billboard No. 1 entry for ‘Boarding House Reach’ follows in the footsteps of White’s other toppers 2012’s Blunderbuss and 2014’s Lazaretto. He produced his first record in four years himself. White also recorded it at his Third Man Studio in Nashville, TN, as well as Sear Sound in New York, NY, and Capitol Studios in Los Angeles, CA.

Garth Brooks May Move Gigs To Aviva If 5 Croker Nights...