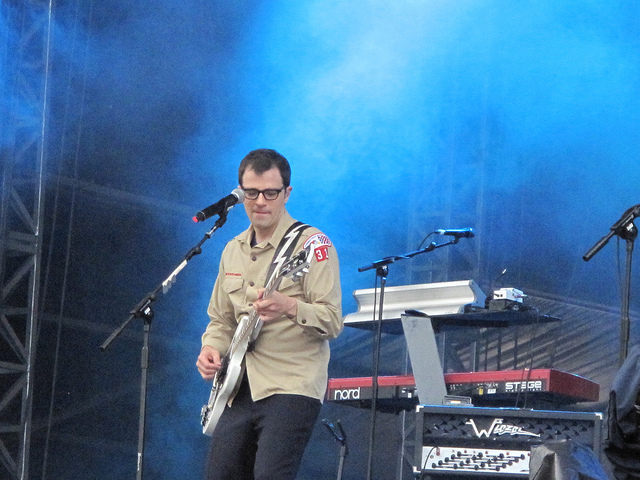 Weezer say that their upcoming album, Everything Will Be Alright In The End, was heavily impacted by their Weezer cruise.

The Weezer cruise, first started in 2012 featuring Weezer, Dinosaur Jr and comedians performing on a ship. In February 2014, the Californian rockers were joined by Cat Power, Toro Y Moi and The Cribs.

Fans of the band pack onto a massive cruise ship, sail around Miami and the Caribbean and watch their favourite acts perform.

Speaking with Q Magazine, frontman Rivers Cuomo said, “One of the most inspiring moments for this record was when we did the Weezer Cruises and we were locked up with a bunch of our fans for five days. It was just such a feeling of love and support and passion for the most uniquely Weezer parts of what we do,” he said.

Everything Will Be Alright In The End is rumoured to be a return to form for the band. Weezer worked with producer Ric Ocasek (The Cars), who previously produced the band’s debut The Blue Album in 1994, that focused attention on the single ‘Buddy Holly’ and The Green Album in 2001 that featured the smash hits, ‘Hash Pipe’ and ‘Island In The Sun’.

In an interview, Cuomo told NME the new album was also influenced by his relationship with his father. “My father was in the army, stationed in Germany, when I was growing up, so I didn’t see him much. That gave me a lot to write about, and I explored the father figure theme in other ways, too. There’s a song called ‘Eulogy For A Rock Band’ about Weezer’s musical forefathers. ‘The British Are Coming’ is about the American colonies’ relations with their imperial father, the British Empire. And ‘Foolish Father’ could be me singing about my father or me singing about my daughter.”

Everything Will Be Alright In The End is due September 29th.