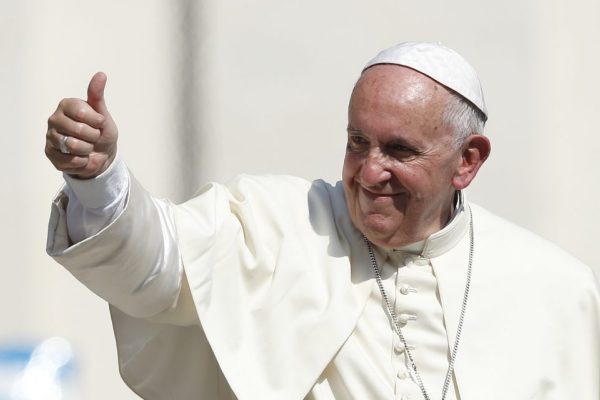 An audacious campaign has been launched by Veganuary founders Matthew Glover and Jane Land. This campaign asks Pope Francis who is arguably one of the best known and most influential people in the world – to make a simple change which will benefit the planet.

The Million Dollar Vegan campaign is led by 12-year-old vegan activist Genesis Butler who has written a letter to Pope Francis imploring him to abstain from all animal products throughout Lent. The letter is being printed in national newspapers in 15 countries today and tomorrow.

But perhaps the most eye-catching support comes from Paul McCartney, an actual bonafide Beatle! The long-time vegetarian and founder of Meat Free Mondays has signed the letter to the Pope. If the Pope agrees to go vegan for Lent, the Blue Horizon International Foundation will donate $1 million to a charity or charities of his choice.

In a statement from the organisers, they ask the question, why Pope Francis? In his 2015 Encyclical Letter, Laudato si’, Pope Francis spoke out against global warming, deforestation, biodiversity loss, and the suffering of billions of animals.

The Million Dollar Vegan campaign highlights that there is one human activity that drives this destruction: animal agriculture. After all, farming animals has a greater impact on fuel emissions than the entire global transport sector combined.

Million Dollar Vegan humbly asks the Pope to try vegan for Lent and set an example of how each of us can align our principles of caring and compassion with our actions.

Research from Dr Joseph Poore at Oxford University shows that each person that goes vegan for Lent will save emissions equivalent to a flight from London to Berlin, and if every Catholic on the planet takes part, it will be equivalent to the whole of the Philippines not emitting CO2 for a year!

A petition has also been created which you can sign here.

Man Jailed For Filming Teenage Students While They Were Undressing