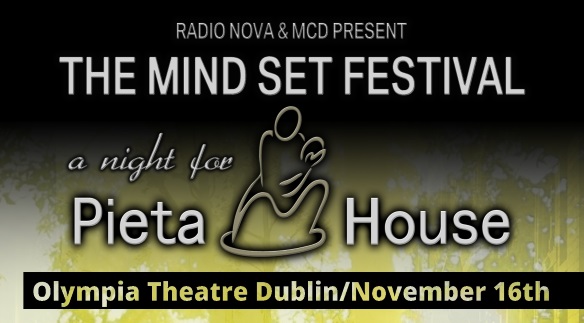 Radio NOVA and MCD present a fantastic night of fun, laughs and music in support of Pieta House.

Pieta House provides an immeasurable amount of support to communities throughout Ireland.

Its founder Joan Freeman, opened the centre for the prevention of self-harm and suicide, in Lucan in January 2006. Since then, they have opened six centres of excellence in Ballyfermot, Mungret, Roscrea, Tuam, Bishopstown, Castleisland and have an outreach centre in Finglas.

In 2013, nearly 4,000 people came to Pieta House for help and those numbers are rising all the time. 90% of the centre’s income comes from fundraising events and we need you help supporting this great event at the Olympia Theatre.

Pieta House are really spoiling you with this line-up, they’re putting on a plethora of Irish artists to perform on the night.

To buy tickets for The Mind Set Festival in the @olympiatheatre on Nov 16th please click here: http://t.co/onokO8pIjv pic.twitter.com/K7ph8GtZpY

This brilliant night of music is kicked off by Dublin band Friends Of Emmet who released their debut album State Of Mind, earlier this year. They are joined by rock/indie band The Pale, who’ve been together since 1990, and Picture House, well known for a string of hits over the years, most notably the song ‘Sunburst’ from the 1998 album Karmarama.

Other groups taking the stage are pop rock band Blink, who are this week celebrating their 20th anniversary of their debut album, A Map of The Universe, The Incomparable Benzini Brothers, they first formed in 1985 busking in Dublin, and the rock-folk-trad group In Tua Nua.

Also appearing on the night are Dublin rock band The Fat Lady Sings, Cactus World News, The Fountainhead, Cry Before Dawn, Those Nervous Animals and many more.

You can listen and get a taste of the performers on the night below.

Tickets are only €20 to go watch these iconic Irish bands and the concert takes place on Sunday November 16th.

So go on and treat yourself to a great night out, support a fantastic cause and help out Pieta House.