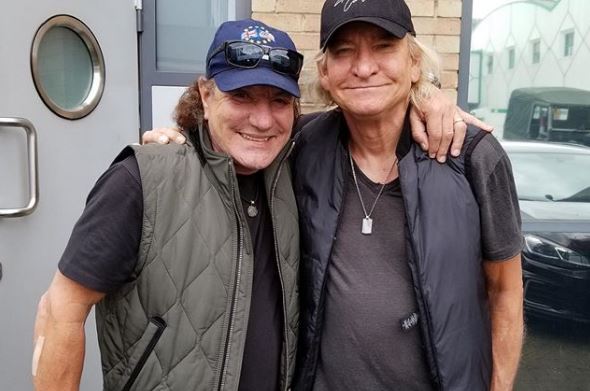 The Eagles axeman Joe Walsh has revealed that he has worked on new music with AC/DC icon Brian Johnson! That’s while his band was in London for a concert.

Walsh and The Eagles played Wembley Stadium in London on Sunday, June 23rd and he shared the news on to Instagram that hung out with Johnson the next day.

Joe posted a photo with the legendary  AC/DC lead singer on the social media site and wrote:

“Great day making music with my old pal Brian today in london. We nailed it! Love ya man!”

Walsh has been a guest on Johnson’s A Life On The Road television series. That’s where the two worked on an improved song while chilling out in a limousine. Neither rock star has said what this new music could possibly be.

Great day making music with my old pal Brian today in london. We nailed it! Love ya man!

In Episode 5 Season 2 of Brian Johnson’s A Life On The Road @BrianJohnson meets @JoeWalsh in the back of a limo.
Joe brings his guitar along so Brian writes a song. 🙌🏻
A bit of tweaking and this could be a potential @acdc song. pic.twitter.com/GFOksvlkg7

Marilyn Manson Turns Himself In To Police After Alleged Spitting Incident