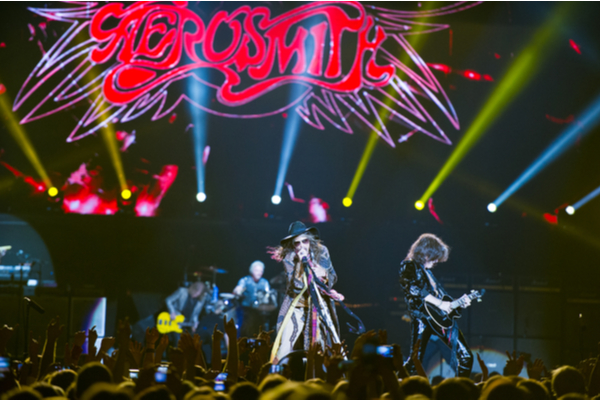 Rock legends, Aerosmith have postponed their UK arena shows until 2022 and have also self-confirmed their slot at next year’s Glastonbury Festival. The band was due to play a host of dates but had been curtailed because of the coronavirus pandemic.

Steven Tyler, Tom Hamilton, Joe Perry, Brad Whitford and Joey Kramer were due to hit the UK in July 2020 as part of their European tour. However, last summer’s gigs in London and Manchester were pushed back to June 2021. An extra Aerosmith gig was added shortly before Christmas, to hold a gig in Sheffield.

The Boston rock legends are now set to grace London’s The O2 on Wednesday the 22nd June 2022, before travelling to the Manchester AO Arena on June 28th, and the Sheffield FlyDSA Arena on July 1st. Aerosmith also listed a gig at Glastonbury Festival on Saturday June 25th 2022 on the page as part of their touring schedule. However, the page has since been amended to remove the Glastonbury date.

No further details have been disclosed on the page as of yet. Although, this momentary action from the band’s page does make it seem likely that Aerosmith will be headlining the Pyramid Stage at Worthy Farm. No official statement has been made by the festival, who usually announce their line-up a few months before the festival is due to take place.

Last month, Glastonbury Festival was cancelled for the second year running, due to the COVID-19 pandemic. In a statement released by organisers Emily and Michael Eavis, they said that despite their best efforts they “simply will not be able to make the festival happen this year”.

Aerosmith’s 2022 dates form part of the Deuces are Wild tour, the result of Aerosmith’s wildly popular 50+ date residency at the Park MGM in Las Vegas.