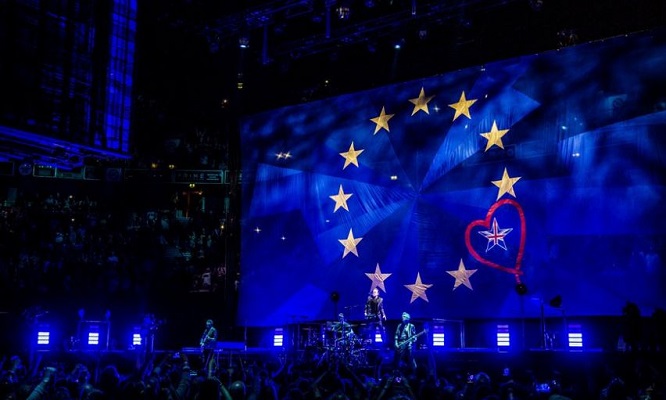 During U2‘s O2 Arena show in London last night (October 23rd). Just before their political song ‘Get Out Of Your Own Way’, Bono gave his thoughts on Brexit, saying it was a “loss of shared dreams.”

The lead singer described London as “a great European city.” Bono delivered the message in front of a massive EU like flag with yellow stars. One of the stars were replaced by a Union Jack star encircled with a heart.

Bono said to the UK crowd,

“We’ve just been touring all across Europe and whatever you think about it, all we heard about from Madrid to Berlin to Paris to Amsterdam is that people love the UK.”

The singer also said it was Europe’s loss,

“They love you. And no-one wants you to leave. And that’s just the truth. For us, it’s more than just a gold star falling off a blue flag. It’s a loss of shared dreams, shared strengths. Without you, we are less. Without you, the English, the Scottish, the Welsh, the Northern Irish, we are less.”

U2 also played their last song ’13 (There Is A Light)’ to Eugene Peterson, an 85-year-old American pastor and scholar who passed on Monday. “We’d like to dedicate this night to the great Eugene Peterson who left us last night,” the singer said.

The band are currently on their ‘experience + innocence’ tour.