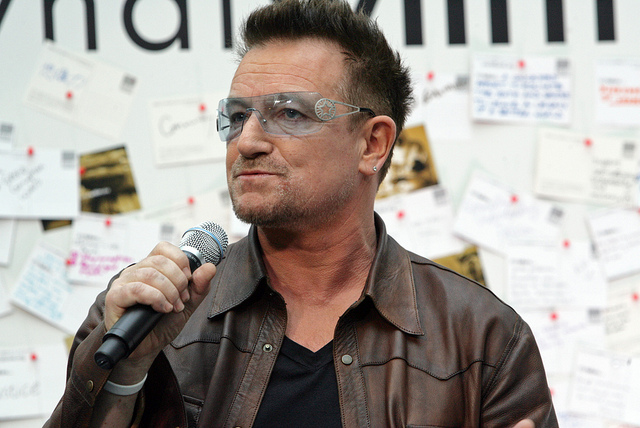 Bono has been named in a list of ‘Women of the Year’ in an annual list compiled by Glamour Magazine.

The U2 frontman was named due to his work and activism in the issue of gender equality. The magazine said “For years our Women of the Year advisory board — made up of past winners, plus our editors — has put the kibosh on naming a Man of the Year on the grounds that men aren’t exactly hurting for awards in this world and that here at Glamour the tribe we’re into celebrating is female.”

The magazine added, “But these days most women want men — no, need men — in our tribe. When the [US] president declared himself a feminist, when super-cool actors line up to endorse the United Nations’ #HeForShe campaign, when a major male rock star who could do anything at all with his life decides to focus on the rights of women and girls worldwide — well, all that’s worth celebrating.”

Bono said “I’m sure I don’t deserve it,” in his interview with the magazine. He added, “But I’m grateful for this award as a chance to say the battle for gender equality can’t be won unless men lead it along with women. We’re largely responsible for the problem, so we have to be involved in the solutions.”

The singer’s most recent campaign, ‘Poverty is Sexist’, works to give the world’s poorest women access to food, clean water, education and healthcare. The campaign also works towards the protection of women’s civil and human rights.

The musician was asked about the possible reasons for the reluctance from other men to work towards gender equality, to which he said “Men can be a bit thick, and I include myself. Honestly, things that ought to be obvious sometimes are not.”

He added “We can do much more than we think we can. Leaders are accountable to all of us. If they don’t support women and girls, vote them out of office. To quote Nelson Mandela, ‘It always seems impossible—until it’s done.’ ”