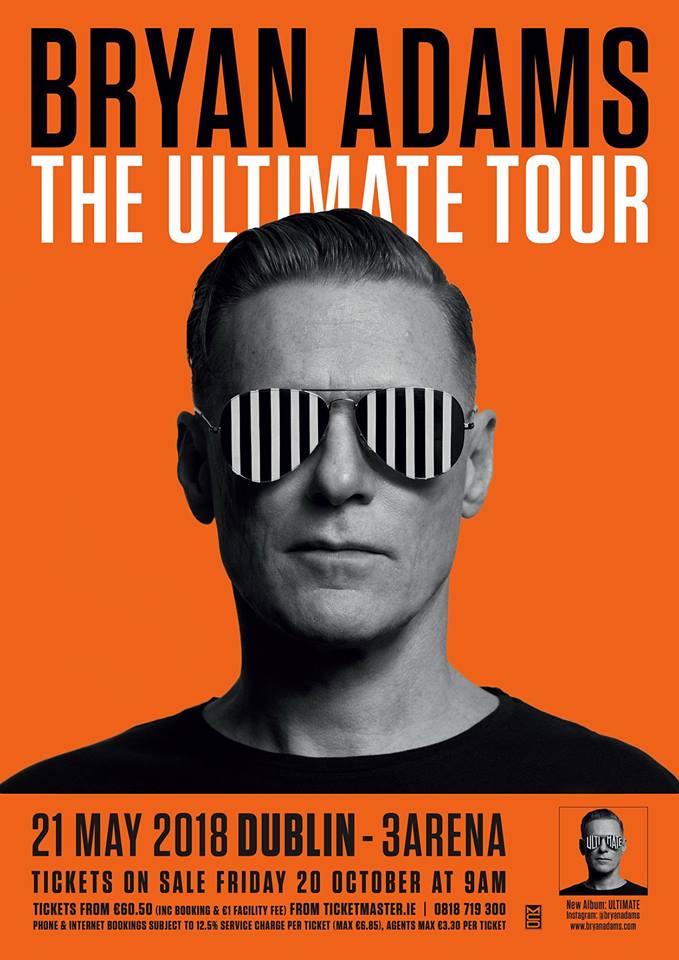 BRYAN ADAMS THE ULTIMATE TOUR is coming to the 3Arena Dublin in the Summer of 2018. The tour will kick off next May and see Adams come to the 3Arena on the 21st of May.

Bryan Adams is back! The multi-million selling recording artist is set to embark on a UK & Ireland arena tour – including a show at the 3Arena, Dublin on the 21st of May 2018. The tour is in support of his new album Ultimate, which is out on Friday the 3rd of November and will feature all the hits plus two brand new tracks.

Bryan Adams The Ultimate Tour will see the showman perform a  set of material from his forthcoming new album Ultimate, which features a mix of new tracks and enormous hits from an incredible back-catalogue including “(Everything I Do) I Do It For You”, “Can’t Stop This Thing We’ve Started”, “Summer of ‘69”, “Heaven” and more.

Bryan Adams wowed critics during the recent ‘Get Up’ tour for his “remarkable energy” (Telegraph) and “cool and classy” (Daily Express) performance style. Earlier this month he closed Prince Harry’s Invictus Games in Toronto with a mind-blowing concert where he was joined on stage by Bruce Springsteen.

Tickets are on sale at 9am on Friday the 20th of October at  TICKETMASTER.IE

Tickets priced from €60.50 inclusive of booking and facility fee’s go on sale at 9am next Friday, October 20th via Ticketmaster outlets and www.ticketmaster.ie

Tickets go on general sale at 9am on Fri 20 October at www.ticketmaster.ie