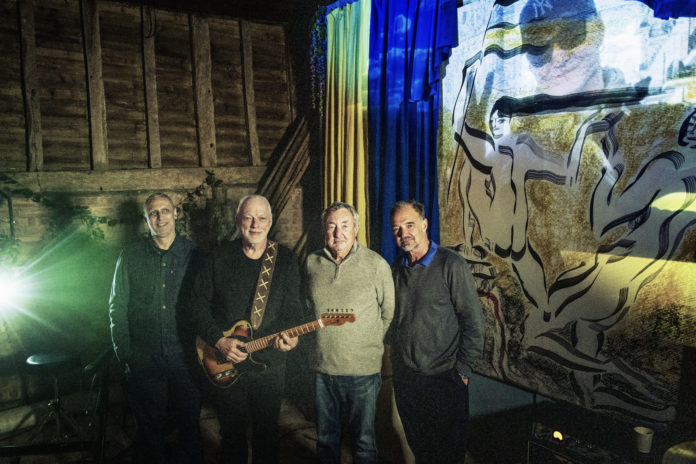 The track which is titled ‘Hey Hey Rise Up’, also represents the first new music from Pink Floyd since they released their ‘Division Bell’ album in 1994.

They also recently removed their music from Russia and Belarus. More on that here.

The track itself also features a contribution of Ukranian singer Andriy Khlyvnyuk. Khlyvnyuk is the lead singer for the band Boombox. The band also played with Gilmour for the benefit gig for the Belarus Free Theatre gig in 2015.

The video for this track was directed by Matt Whitecross. You can check this out below.

“totally wrong for a superpower to invade”

A press release had also said that Pink Floyd had recorded this track on March 30. All proceeds will also go towards the Ukraine Humanitarian Relief.

“I hope it will receive wide support and publicity”, David Gilmour said.

“Like so many, we have been feeling the fury and the frustration of this vile act of an independent, peaceful democratic country being invaded and having its people murdered by one of the world’s major powers”, he also added.

2/3 Gilmour, who has a Ukrainian daughter-in-law & grandchildren: "We, like so many, have been feeling the fury and the frustration of this vile act of an independent, peaceful democratic country being invaded and having its people murdered by one of the world's major powers".

3/3 All proceeds from the song will go to Ukrainian Humanitarian Relief. https://t.co/i1l92D3AYU

“We recorded the track and video in our barn where we did all our Von Trapped Family live streams during lockdown. It’s the same room that we did the ‘Barn Jams’ with Rick Wright back in 2007″, Gilmour said on the track’s creation.

“Janina Pedan made the set in a day and we had Andriy singing on the screen while we played, so the four of us had a vocalist, albeit not one who was physically present with us”.

Pink Floyd’s Gilmour also revealed that Khlyvnuk was midway through a US tour with Boombox, before returning to his homeland to fight for his country against the Russian invasion.

“He stands in a square in Kyiv with this beautiful gold-domed church and sings in the silence of a city with no traffic or background noise because of the war”, Gilmour said. “It was a powerful moment that made me want to put it to music”.

“I thought: that is pretty magical and maybe I can do something with this”, he continued.

“I’ve got a big platform that [Pink Floyd] have worked on for all these years. It’s a really difficult and frustrating thing to see this extraordinarily crazy, unjust attack by a major power on an independent, peaceful, democratic nation. The frustration of seeing that and thinking ‘what the fuck can I do?’ is sort of unbearable”.

“I played him a little bit of the song down the phone line and he gave me his blessing,” he added. “We both hope to do something together in person in the future”.