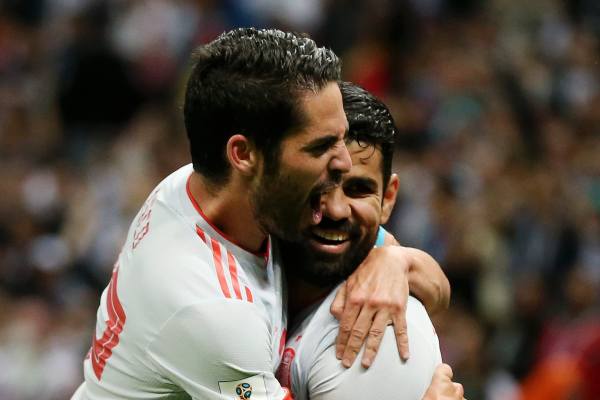 Spain have one foot in the last-16 of the FIFA World Cup, but were made work for their win over Iran in Group B.

Fernando Hierro’s team won 1-0, the breakthrough coming from a fluke that flew off Diego Costa’s knee – his third of the tournament – in Kazan.

Iran had chances to level, none more so than when they had a goal disallowed for offside just after the hour mark.

Iran resisted and rebelled and Spain suffered more than they had imagined.

Despite that Spain need only to avoid defeat to Morocco on Monday to make the second round while the winners of Portugal and Iran in Saransk will join them.

Carlos Queiroz’s Iranians twice thought they had scored with the second was ruled out for offside.Iran switched to attack mode and Spain struggled to regain control. However it was not to be.

Several of Iran’s players slumped to the ground at the final whistle, having pushed one of the tournament favourites so close. This was their first competitive defeat since the 2014 World Cup.

That way that they switched from a defensive focus to chase the game after falling behind showed they have more to offer than simply a stiff rearguard.

“We showed that we were ready to suffer and ready to compete.

“There’s no doubt Spain play wonderful, stylish football but we deserved more for the way we played.

“We will learn a lot from this game. If you think of it like tennis, we had one match point today and we will have another against Portugal. Everything is still open. We are still alive and still dreaming.”

“What I can say is that we have three more points. We knew it was going to be very difficult and, sure enough, it was a very complex game.

“There were times in both halves when things were tough. During the break, we knew we had a plan and we carried it out – my players did what they had to do.

“Iran are a strong team and it’s very tough to score against them. We knew how hard it would be. But once again my players have given everything.”

He was the match-winner in Kazan