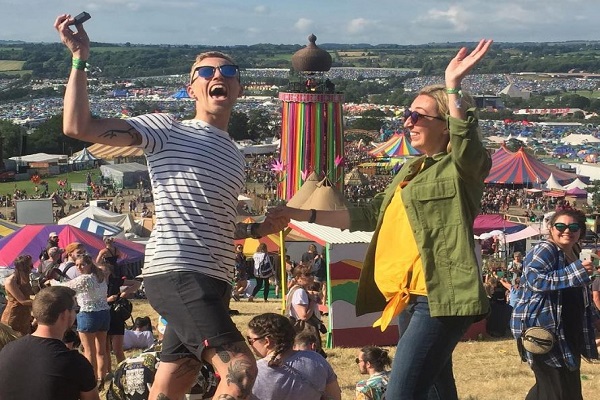 A pair of lovers got engaged at Glastonbury Festival back in 2017 are set to be wed at this year’s event.

The romantic couple revealed on social media that they intend to get married there this weekend!

Jack Watney, aged 32, and Sarah Adey, aged 31, got hitched at The Croissant Neuf bandstand, found in the Green Fields area of the festival, at 11.30am, today, Thursday, June 27th.

The newlyweds-to-be confirmed that the ceremony lasted about half an hour and had 50 guests present before they made their way to the Glastonbury sign on the hill above the Park Stage.

The couple met at Plymouth University and became Glastonbury fanatics when Jack took Sarah to the massive music event for the first time back in 2011. They’ve been in attendance every year of the festival.

The NME reports that Jack got down on one knee 2017 at the top of Pennard Hill, where one can see panoramic views of the Glastonbury site.

Speaking to SomersetLive Jack revealed how special the place is to them.

“Doing this became a sort of ritual for me and my family,”. “I did that with Sarah when she came to the festival too.We would do it in the day and in the night. The view is pretty spectacular.

Jack said he was inspired by other festival goers, “We had seen another couple (bless their wedding) at the festival and back in 2017, before the festival, I hatched a plan to propose to Sarah on that hill.”