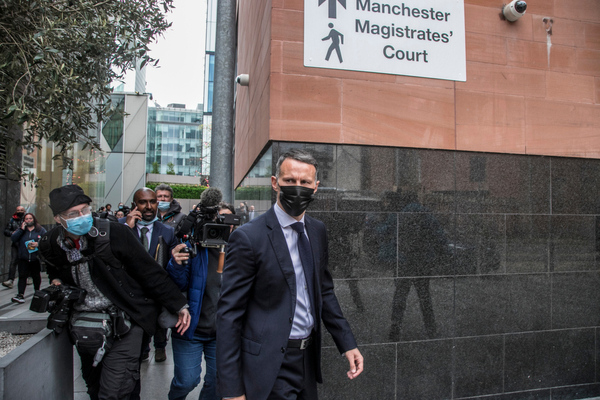 A court was told yesterday how Ryan Giggs kicked his girlfriend in the back and threw her naked out of a hotel room.

The former Man United star has been accused of assaulting Kate Grenville at his home in Worsley, Greater Manchester last November. Giggs is accused of causing her actual bodily harm.

He is also facing a charge of common assault on Kate Grenville’s younger sister Emma on the same date.

Appearing at Manchester Crown Court, Mr Giggs pleaded not guilty to the charge.

It was also claimed that Ryan Giggs subjected Kate to “harassment, humiliation, degradation and abuse” during their relationship.

The court was also told that the former footballer kicked her in the back during a fight. This allegedly took place at London’s Strafford Hotel. Giggs had kicked her after Kate accused him of flirting with other women.

It was claimed that Giggs threw Kate out of the hotel room while she was naked, and hurled her bag at her.

The Welshman was also accused of threatening to email his partner’s employers and friends about their sexual relationship.

The court had already heard from prosecuting Andrea Griffths how Giggs allegedly “isolated” Kate Grenville from friends and colleagues. Giggs has also been accused of subjecting her to “degrading treatment” to “keeper her in the relationship”, by using “threats or physical or professional harm”.

Ryan and Kate met when she was working as a PA for his hotel football business venture.

The trial is expected to run for three weeks, with a provisional date set for January 24.

Police had been called to the star’s home on the date in question, following reports of a disturbance.

Following his arrest, he was released on bail pending further enquiries.

Ryan Giggs was unable to take charge of Wales during their Euro 2020 campaign. In Giggs’ absence, Rob Page took charge of Wales for the tournament. They reached the last 16 of the competition where they lost 4-0 to Denmark.