Home Music News On This Day In Music: R.E.M. Played Their First Gig 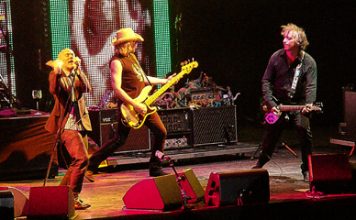 American rock band R.E.M. appeared live on the stage for the first time on this day in 1980 to play a gig for a friend’s birthday party. The party was held at St Mary’s Episcopal Church in Athens, Georgia.

Stipe & Co. came up with their unique name from flicking through the dictionary! They landed on Rapid Eye Movement and so the band as we know them, R.E.M. was born.

Over the next year and a half, the rockers toured throughout the Southern United States. Touring was painful because a touring circuit for alternative rock bands did not then exist.The group toured in an old blue van driven by Holt, and lived on a food allowance of $2 each per day! A bit of a contrast to when in 1996 they signed with Warner Bros. for a reported US$80 million, (approx. €75 million) at the time the most expensive recording contract in history.

The Georgia natives released 15 studio albums over the course of their career along with  churning out some classic hits like, Losing My Religion, Shiny Happy People, Man On The Moon and Everybody Hurts.

They began work on their fourteenth album, Accelerate in early 2007 with a bit of an Irish connection.  The band previewed several of the album’s tracks during a five-night residency at the Olympia Theatre in Dublin and recorded the album in a nine-week schedule with producer Jacknife Lee. Accelerate was intended as a departure from the 2004 album Around the Sun.

They released it in early the next year and it became the band’s eighth album to top the British album charts and went Gold in Ireland.

Then, in 2011 the band said in their own words that they were “calling it a day as a band.”

After the split, R.E.M. guitarist Peter Buck spoke about what happened at the time and the reasons behind their split. Buck wrote a list of all the things he hated about the music business which in his words was about “five pages long.”

Speaking in an interview with Rolling Stone, he spoke about what exactly was on the list. The R.E.M. guitarist said “Everything except writing songs, playing songs and recording them. It was the money, the politics, having to meet new people 24 hours a day, not being in charge of my own decisions.”

“I hate the business,” Buck declared emphatically, adding that “I didn’t want to have anything to do with it.” Despite this however, he did speak quite fondly about the legacy of R.E.M.

What Two Cult Legend Bands Are Teaming Up For A Concert...