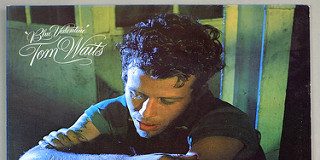 Tom Waits is famous for his distinctive sandpaper baritone. Twenty-seven years ago, the American singer song-writer took Doritos Chips to court for using a ‘Waits’, sound-alike on radio ads.

“Somebody had studied me a little too close,” Waits said on the third day of trial in Los Angeles. “It was the equivalent of all the scars, dimples, the lines all being in the same place. . . . It was a little spooky.”

Under questioning, Waits said he has been paid only once, to advertise a product.

“I was down on my luck and needed the money. So I agreed to do a voice-over for a dog food commercial”  the singer added, “I always liked dogs,”  which evoked laughter from the jurors.

But afterwards, Waits said, he felt like “artistically, I had sold myself down the river. I felt I had betrayed something in me.”

Ever since then, Waits said, he consistently rejected offers to do commercials for products, saying he would “absolutely not” have agreed to do the Frito-Lay commercial and would not have approved it.

He won the influential case and the jury awarded him $2.475 million (€2.339 million) in punitive damages. Waits said after the case, ‘now by law I have what I always felt I had…a distinctive voice.’

He has pursued imitators ever since.

Sixteen years later, Waits was still battling to protect his musical identity. In 2006, he was back in court. The Audi division of Volkswagen used music that was similar to his song “Innocent When You Dream,” sung in a voice like his, for a commercial in Spain. Another case he won.

“It does take a tremendous amount of time, energy and money” to pursue these cases, Mr. Waits told the New York Times in 2006, “But in a way,” he added, “you’re building a road that other people will drive on. I have a moral right to my voice. It’s like property – there’s a fence around it, in a way.”

“It’s part of an artist’s odyssey,” he said, “discovering your own voice and struggling to find the combination of qualities that makes you unique. It’s kind of like your face, your identity.”