Home Music Depeche Mode Inducted Into The Rock And Roll Hall Of Fame By... 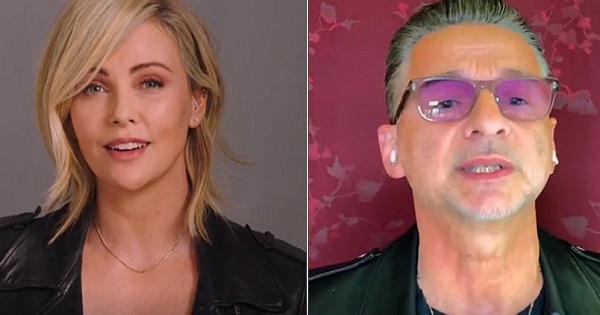 Saturday night saw the induction of one of the great electronic-rock bands into the Rock and Roll Hall of Fame. English synth group Depeche Mode finally received their chance when they joined the elite group of artists.

Charlize Theron inducted them into the Rock and Roll Hall of Fame, calling the band “the soundtrack to my life.” Check out what Theron spoke about in her speech.

“Depeche Mode is the soundtrack of my adolescence. “I’m not kidding. There was literally a song for every occasion of my life. My first date, my first time leaving South Africa, and of course the first time I got my heart broke.

“And so, when I finally got to see them live a couple of years ago, it was like this epic slap in the face of nostalgia. But more than that, when I was at the show, I realize what else I loved about their music. They celebrate the outsider. Depeche Mode’s music brings people together from all different walks of life, makes them feel like it’s OK to be different.

“That really hit me watching the videos at the concert. I was moved to tears. I came home, I told my daughters about it, and I was also really f*****g pissed because I don’t usually go to rock concerts to bawl my eyes out.”

She added: “But truthfully, it speaks to the immense power Depeche Mode has had over the years. It also why, when I got the chance to pick some songs for the ‘Atomic Blonde’ soundtrack, they were the first on my list.

“It’s no surprise they are joining the ranks of the Rock and Roll Hall of Fame. They should have been there 20 years ago, if it was up to me. But what an incredibly well-deserved honour. Thank you, guys, for being the soundtrack to my life.”

The band all gave thanks for the award in their own acceptance speech. Frontman Dave Gahan said: “You know, growing up, listening to music on the radio and having music, it really kind of helped us to feel normal, feel part of something.

“That’s what music does for people and I think that’s what Depeche Mode has done for many people. I think music really brings people together, and God knows we need that more today than it seems any other time.”

The Rock and Roll Hall of Fame recognizes inductees for having contributed over 25 years of musical excellence.

The evening also saw Iggy Pop induct Nine Inch Nails into the Class of 2020, as well as a tribute to T-Rex’s Marc Bolan from Ringo Starr. Biggie Smalls, Whitney Houston and The Doobie Brothers were among other inductees.

The 50 Album Experience This Month On Nova

Albarn Believes Artists Should Be Allowed To Perform During This Pandemic