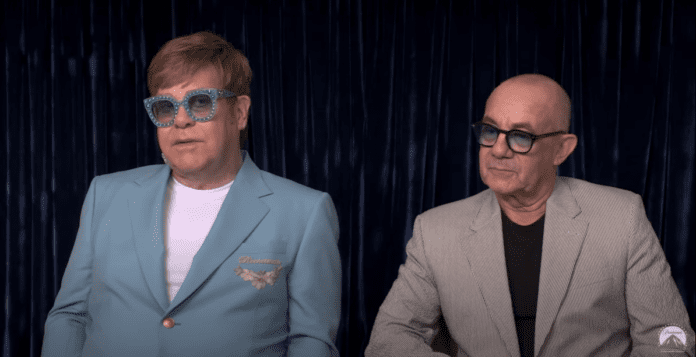 To mark his 74th birthday, Sir Elton John has released his first song that he wrote with Bernard Taupin.

The music icon and Taupin first met, having both answered an advert from NME looking for songwriters. Elton John was aged 20 at the time and went by the name Reg Dwight.

This track “Scarecrow” has been made available on streaming and digital formats for the first time. It has also been released alongside five other tracks and b sides.

Taupin had already written the lyrics, but this is the first time that John put music to Taupin’s words.

This collaboration was mentioned in Taupin’s track “Curtains” from his 1975 album “Captain Fantastic”, as well as “The Brown Dirt Cowboy”. That track contained the line “I used to know this old scarecrow, He was my song, My joy and sorrow”.

In 2018, Taupin sold his lyrics to manuscripts. Scarecrow was the only track that did not go to auction however.

The last six tracks that were released from the box set including “Scarecrow”, mean that the collection is now fully available for the first time on digital platforms. The other tracks include, “Keep It A Mystery”, “Smokestack Children”, “Two Of A Kind”, “Conquer The Sun”, and “Holiday Inn”.

“A very special place in my heart”

“Scarecrow will always have a very special place in my heart, and I know that Bernie feels the same way too”, Elton John said.

The singer who previously won an Oscar with Sir Tim Rice , for “Can You Feel The Love Tonight”, also had this to say. “It’s the song that started it all”.

“Jewel Box contains the embryos of something special, and Scarecrow goes right to the heart of that, naive compositions of a time and place that went on to become something very special indeed”.

“This last year in lockdown has given us all time to look back and reflect – finding this song again when I put together the Jewel Box and thinking of everything that has happened in our careers and friendships that has sprouted from this one point is just remarkable”.

Elton summed up the pair’s friendship, “How lucky we are to have found each other”.

The duo were portrayed by Taron Eagerton and Jamie Bell in that 2019 biopic, “Rocketman”.

To celebrate Elton’s birthday, BBC Four will also broadcast shows about him from the archive tomorrow (March 26). These shows will include Elton John: Electric Prom, Elton John: Uncensored and Elton John at the BBC.