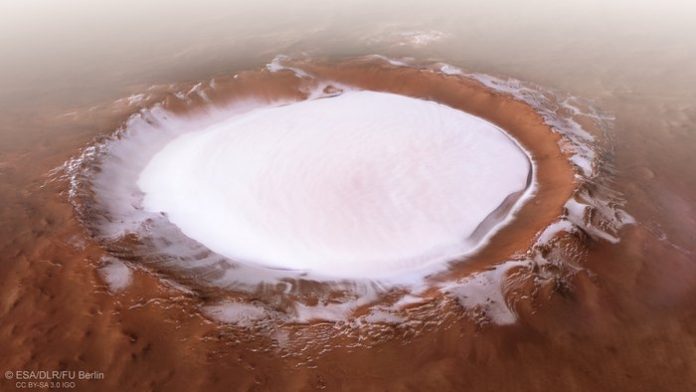 The European Space Agency (ESA) has released new images of Mars, just in time for Christmas. The spacecraft has taken a photo of what seems to be a large patch of fresh snow on Mars. The Korolev crater is 82 kilometres across and is located in the northern lowlands of Mars.

The photo is actually a simulation, imagery from the ESA’s Mars Express orbiter was overlaid on top of existing topographical information. The altered view gives us a close up view of Mars.

The ESA’s Mars Express mission launched on June 2nd 2003 and reached Mars six months later. This month is the 15-year anniversary of its orbit and the start of its science programme.

The satellite uses what’s known as the Mars Express High Resolution Stereo Camera (HRSC). Korolev crate is an excellent example of a martian crater and is actually filled with ice. At the centre there’s a mound of water-ice some 1.8 kilometres thick all year round.