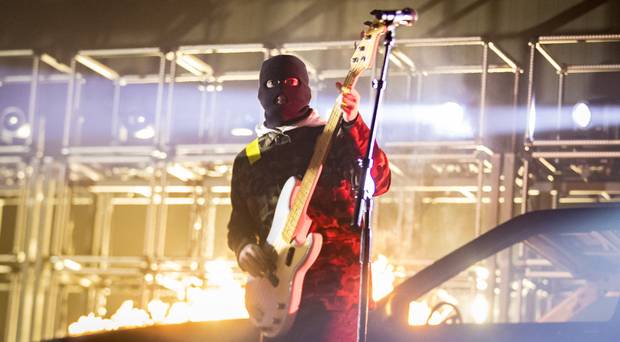 Hip-hop poppers, Twenty One Pilots’ fans have come to their defence after a NI political party deemed their stage imagery as “inappropriate”.

The band were playing a show at Belfast’s SSE Arena last Saturday, March 2nd. As part of their Bandito tour, members Joshua Dun and Tyler Joseph both donned balaclavas and played in front of a burning car.

According to the Belfast Telegraph, leader of the Traditional Unionist Voice (TUV) Jim Allister hailed the imagery as “inappropriate”.

“Whatever they thought they were doing, this is hardly the sort of imagery that Belfast needs. Balaclavas still speak loudly in Northern Ireland of the evils of terrorism, with many still struggling to cope with the devastation and murder wrought by balaclava-clad killers.”

“I would be very surprised if nobody associated with this operation has any knowledge of the Troubles, which has been beamed around the world for decades.”

According to the paper via the NME, a 19-year-old fan who was at the show said that they “didn’t think of terrorism when I saw the flaming car or balaclava.”

“I thought it was amazing! I could see how some people would be upset but I don’t think it was in a malicious way.” Fans also responded to Mr Allister’s comments on social media, with one fan saying:

“I’d say given the age profile of those attending it’s maybe time our older politicians stopped harking back to the past. It obviously didn’t offend or glamorise terrorism to those young people who attended and wasn’t specifically aimed at NI. Time to move on!”

You really haven’t done any research have you? The balaclavas, the burning car, etc, all have very specific meanings and references and are part of EVERY show. Not just Northern Ireland.
Really, take one quick look at what you write about before you write headlines like this. pic.twitter.com/He8qUCoE6O

Others pointed out that Twenty One Pilots call their balaclavas ski masks and put them on at all of their shows. They also said that the masks were a symbol of their own personal masks that they take off to reveal their real selves to the audience.

Tyler coming up this close to us was the best moment of my life :))