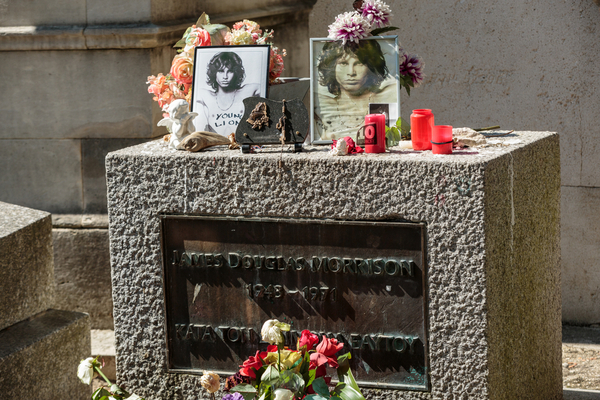 July 3 marked 50 years since musician Jim Morrison passed away. Fans have been paying tribute to the star, both online and in person.

Morrison died on 3 July 1971. The musician was found dead in a bathtub of an apartment in Paris. At the time, Morrison’s band the Doors were in the middle of recording their seventh album “Other Voices”.

“His music brings so much happiness”

Fans and stars of the entertainment industry have been paying tribute to Morrison.

One such fan of the Doors and Dutch resident, Imelda Bogaard usually visits the shrine for the singer’s anniversary or for his birthday on December 8. Imelda also told the Guardian  that his music continues to “bring so much happiness”.

“I come here as often as I can, either for the anniversary or on 8 December for his birthday”, Imelda said. “The music brings so much happiness – and it also brings everyone together”.

Celebrate Jim’s legacy by tweeting one of your favorite quotes, poetry verses, or lyrics of his.

People have continued to pay tributes to Morrison.

One fan wrote, “50 years ago today There are originals, people who gain influence from them and those that copy because they have no confidence to be themselves. Mr Mojo Risin was certainly his own man. Lucky enough to have been up to Pere LaChaise to pay my respects. Jim Morrison 1943-1971”.

Rockstar poet Jim Morrison passed on this day in 1971 🥀🔥 pic.twitter.com/1sfmV9RwQy

Earlier this year, the remaining members of the Doors released almost 600 pages of writings by Jim Morrison.

The book titled, ‘The Collected Works of Jim Morrison: Poetry, Journals, Transcripts and Lyrics’, is the most comprehensive collection of Morrison’s work.

Included in the book is unrecorded song lyrics, photos, drawings, personal notebook entries and photos. The book was also forwarded by longtime fan of the musician Tom Robbins.

The Doors’ “Morrison Hotel” album is also got reissued to celebrate its 50th anniversary.

It contains the original record newly remastered by the band’s long time engineer and mixer Bruce Botnick. The reissue contains over 60 minutes of unreleased studio outtakes.

“There are many takes, different arrangements, false starts, and insightful studio conversations between the band and producer Paul Rothchild who was in the control room. It’s like being a fly on the wall”, Botnick said.

Previously unreleased takes of “Peace Frog” and “Blue Monday” were also shared in 2020.