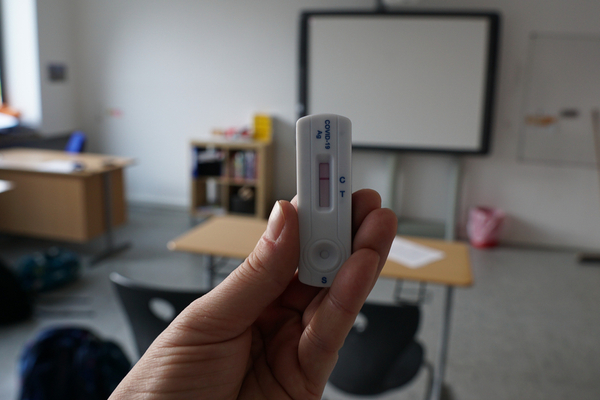 The Minister for Education has revealed that antigen testing will be available for school pupils from next week. Today, Norma Foley claims the HSE-led programme of antigen testing is due to take place from next Monday.

“The chief medical officer has now determined that there is a role for antigen testing as an additional tool in our schools. It has been led by the HSE, and it will be operational, the HSE has informed, from the 29th,” Foley said.

Amid concerns of staff shortages in schools, Ms Foley stressed that the Department of Education is doing all it can to increase the availability of substitute teachers. Following a meeting with Ms Foley on Tuesday, teacher education colleges have agreed to release some students to cover in schools.

It is also believed that part of the plan will see teachers reaching retirement permitted to working for longer, without affecting pension entitlements. Teachers who are on secondment to education support services are now also able to return to work in schools.

“We now have added significantly in this past week. One hundred additional teachers and now 200 additional as of yesterday, so we now have 680 teachers being made available to provide emergency cover to schools,” Ms Foley told RTÉ Radio. “It is a cumulative approach that’s been taken.”

However, Ms Foley has defended her department against accusations of failing to predict the staff shortages before this had happened. The Minister for Education claims that there had been “significant”, long-term planning and “not just in immediate planning”.

“I do want to acknowledge that these are exceptionally challenging times for all of society, but most especially within the education sector.”

Despite rising cases and calls from trade unions and headteachers for the resumption of contact tracing, Ms Foley believes that schools still remain largely safe places.

“There has been nothing easy about COVID”, Foley declared. “There are no straight lines when it comes to COVID. But notwithstanding that I do want to acknowledge that there has been considerable support and infection prevention control measures made available to schools. Schools continue to be places of low transmission, notwithstanding that we see now in the wider community an increase in terms of COVID.”

Speaking about the problems facing schools, the Minister for Education said that any schools experiencing difficulty with ventilation should contact her department for technical advice. Ms Foley told RTÉ radio’s Morning Ireland that over 35,000 CO2 monitors had been installed in schools throughout the country, and that natural ventilation was the best possible source.

Schools with additional difficulties could contact engineers or architects or make use of a technical advice team in the Department, she said. Ms Foley defended planning by her department, she said that many of the plans now being implemented had been in place last August, but that the pandemic has taken “many twists and turns.”

“We have to be resilient and flexible at given times to introduce new measures as required,” said Foley. “That is exactly what we have done at this point. And indeed, we will continue to do going forward.”

Comments from Foley follow calls from Gerry Horkan to ban unvaccinated people from shops, public transportation, and therefore living normal lives. The Fianna Fáil Senator and Spokesperson on Law Reform has said there should be consideration given to banning the unvaccinated from supermarkets and public transport. The Dun Laoghaire based official feels that the higher the vaccination rate from COVID-19, the lower the death rate. However, this does not match the numbers laid out by HSE (between April 1st 2021 and November 13th 2021) on deaths between vaccinated and unvaccinated people, with a higher percentage rate of vaccinated people losing their lives than unvaccinated.

Lockdown Blues For Australia With A Rise In Positive Coronavirus Cases