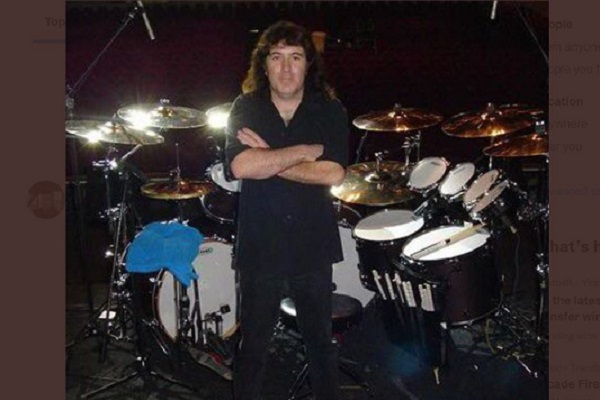 Former AC/DC drummer Simon Wright recently reflected on his time with the band. A certain epoch which saw Wright as the band’s sticksman for several big shows across a 6 year period.

Joining AC/DC in 1983, Simon Wright replaced Phil Rudd and remained with the band until 1989.

Such shows even included 1985’s ‘Rock In Rio’ and ‘Monsters Of Rock’ in England’s Castle Donington.

“I was in it for, like, seven and a half years or so, and there were a lot of big shows — like we did the Rock In Rio in ’85 and stuff, and some of the Monsters Of Rock shows in England, at Castle Donington”, Wright said.

He also added, “You never cease to be overwhelmed by some of the stuff. You look out and there’s four hundred, five hundred thousand people in Rio, and you’re just, like, ‘Wow. Keep your head down. Keep playing”.

“good moments on each of ’em”

AC/DC released three albums in this time, ‘Fly On The Wall’, ‘Who Made Who’, and ‘Blow Up Your Video’.

When asked which album he prefers, Simon Wright feels that each album had its merits.

“I don’t know if I have one. I think there’s good moments on each of ’em in a different way. It was all great recording all three albums, and it was really cool”, Wright said.

“A lot of people I meet — it’s been a while since I did those albums, but I do meet people who tell me that they love this album, they love that and stuff, and some of them even say it’s their favorite album. So it’s all good. It’s nice. I love meeting people and listening to what they think of albums like that, and the DIO albums as well I did. So it’s all good”.

Despite being the band’s drummer for a noteworthy length of time, Simon Wright has revealed that he has not had much contact with his former bandmates. He also added that fans should be too surprised with that fact.

“No, I haven’t been in touch for years”, Wright added. “I did text [AC/DC bassist] Cliff Williams four or five months ago. I don’t know why. I just congratulated him on his retirement and wished him well. And he texted me back and said, “Thanks. It’s good to hear from you. I hope you’re well.’ But no, I don’t really keep in touch with them. They’ve got their lives, and I’ve had my life for quite some time now. But if I ran into ’em, I’m sure we’d say hello”.

“There’s people that I’ve played with that I haven’t kept in touch with,” he explained. “And it’s not a problem. You just move on. They’ve got their lives, and I’ve got mine. And I’m busy trying to figure stuff out and keep moving forward and all the usual stuff. I don’t think it’s unusual”.

The current line up for AC/DC were also added to the list of acts who will perform at tribute shows for the late Taylor Hawkins next month. More on this here.